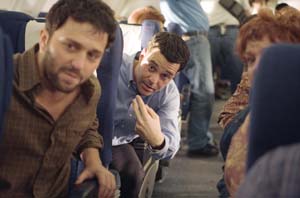 This time we can’t comfort ourselves with the words “It’s only a movie.” Foreknowledge of the horrible reality of Sept. 11, 2001, makes United 93 a tough proposition for some viewers who are fearful of revisiting the emotions of that day. However, it would be misguided to fear this film as Hollywood’s brazen exploitation of a national tragedy for selfish popcorn profits. United 93 is a sober, humanistic portrait of America’s literal “first responders” – the passengers on the only flight that failed to reach its target on 9/11 because in-flight phone calls to loved ones on the ground provided them with information about the already successful attacks and spurred the quick understanding that the aircraft they were aboard had become the instant front line of an unprecedented battleground. While taking nothing away from the courage and quick thinking of the doomed passengers, United 93 refrains from turning them into heroes in the service of rousing national spirit in the manner of many of our politicians, who have used these collective individuals as exemplars of American might and retaliation. United 93 was made with the support of the families of the deceased, who, among other things, helped the filmmakers learn something of their final conversations with loved ones. Nevertheless, everything that occurred on Flight 93 is conjecture of some sort. What writer-director Greengrass captures better than any other speculation I’ve seen is the sense of chaos and panic that must have overtaken the passengers. What we witness is not so much an organized counter-attack as a panicked, last-ditch attempt at self-preservation. Survival rather than nationalism is the instinct at work here, and the film’s hand-held camerawork enhances our sense of the fragmented chaos. We have watched as these travelers pass the time at the airport waiting to board the plane and engage in the kind of chit-chat that travelers do. Their ordinariness increases that horrible “it could have been me” feeling that we’ve all been subject to. The film unfolds in more or less real time (the flight lasted 91 minutes) as we see how little time these people had to grasp the import of their circumstances – no less, devise a plan of action. (Even the much-heralded words “Let’s roll” are used as part of a sentence rather than a rallying cry.) A good chunk of the film’s first hour is devoted to watching the workings of the various air-traffic control towers and agencies as they struggle to gain an understanding of the events that are occurring in front of their eyes as airplane blips suddenly disappear from their radar screens. We are also witness to instances of communications failures among the various towers and agencies as everyone scrambles to comprehend the events and act on their specific mandates. Without dwelling on the subject, Greengrass indicts this aspect of the American defense. Instead of using actors, Greengrass employed many of the actual air-traffic controllers and military commanders who were on the ground that day. Also aiding his film’s universality is Greengrass’ use of little known actors in the central roles, preventing stardom from affecting our ideas about heroism and patriotism. Even though the story told in United 93 is quite specific, the film’s focus on the confusion and incomprehension makes it the story of all Americans. Each of us has a story to tell of where we were or how we heard the news on 9/11. And, for the most part, they are stories of the individual struggle to wrap one’s head around something so unfathomable, to wring order from the chaos. This is the sense in which United 93 reflects our universal American experience. The situation on Flight 93 was dire and demanded immediate response, and the rapid process these people went through as they shifted from frightened individuals to aligned activists is a sped-up – and more costly – version of what we’ve all been going through as we struggle to come to terms with the day our world changed. 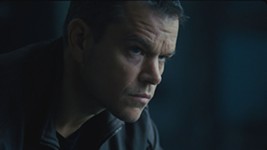