While the characters and events occasionally captivate, Marilyn Hotchkiss' Ballroom Dancing & Charm School never synthesizes into a story of any substance. Miller co-wrote and directed the screenplay, inspired by his 30-minute short film of the same name. And to the delight of the financiers and dismay of this moviegoer, the feature version contains almost the entirety of the original short. The good news is that Miller’s talent has increased exponentially since his freshman effort in 1990; the bad news is that we have to sit through his growing pains in the form of clumsy flashbacks. Confined to the mechanics of working around the short, the film creaks its way through the awkward story. Carlyle, endearingly memorable from The Full Monty, and not so endearingly from Trainspotting, brings all of his wide-eyed Scottish charm to the role of sad-sack widower Frank Keane. When Keane has a chance encounter with a car-crash victim, Steve (the sagaciously satisfying Goodman), he fulfills Steve’s dying wish and goes to a dance class (guess which one?) in the attempt to find Steve’s childhood love. The lost love is absent. But, worry not – enchantment and healing abounds in the form of (drum roll, please) dance lessons. And thus the rambling story unfolds through the use of multiple flashbacks and paper-thin character motivation. The opening sequence, a bold and stylish affair, is shot in unflinchingly blown-out whites and starkly pale blues. And for a few minutes, the film displays promise. But clichés run amok while the talented cast tries their darndest with weak material. As the two-dimensional love interest, Tomei dances her heart out with one good leg and no decent lines. Steenburgen steals every scene she’s in as the purring instructor. Astin is highly memorable as Kip Kipling, a widower convinced his wife is haunting him. Of course, no discussion of this film would be complete without mention of the tenacious Wahlberg. Take a former New Kid, add a skin-tight transparent shirt, some Lord of the Dance moves and it’s instant comedy. Additional highlighted performances include Paymer and the always-endearing Arkin. Don’t be fooled by DeVito’s top billing though; he appears for all of two minutes. The film has talent, quirks, laughs and even some skin, but Marilyn Hotchkiss' Ballroom Dancing & Charm School is several steps shy of a satisfying lesson. 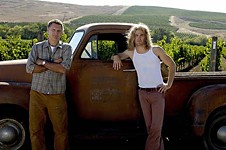 Bottle Shock
Stuff the cork back in: This wine movie was sold before its time. 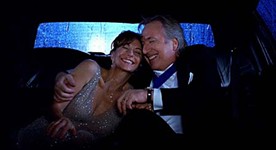 Nobel Son
In this dark comedy, Alan Rickman plays an egocentric chemist, who makes life even more miserable for his family once he wins the Nobel Prize and his son is kidnapped.