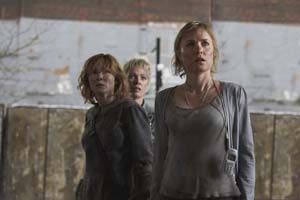 Imagine the town of Dante's Peak as envisioned by H.P. Lovecraft and you'll get a mental image of Silent Hill's impressive art direction and production design. Now imagine it scored by German proto-industrialists Einstürzende Neubauten and helmed by the late Italian splatter legend Lucio Fulci. Then wrap your fist in barbed wire and punch the wall a few times, while reeling in a fit of existential despair. Whoa there, big fella – we didn't say "Simon Says!" But that'll give you a nudge in the tonal direction toward which Christophe Gans (Brotherhood of the Wolf) is heading with this eerie but ultimately unengaging film adaptation of Konami's smash series of video games. Roger Avary's screenplay is a smart mélange of sequences lifted from the game (the one we've played, anyway – there are four installments in the series so far) and fleshed out with hell's own jumble of demonic, pseudo-religious imagery, including some of the most bizarrely unappetizing images of the damned this side of Dante Alighieri (think of Ghostbusters' "Stay Puft Marshmallow Man" after a tanning-bed mishap and you're halfway there). High Art's Mitchell plays Rose, mother of Sharon (Ferland), a young girl prone to sleepwalking and mumbling the words "Silent Hill" while unconscious. When Rose and Sharon set out in search of answers, they end up in in the titular West Virginia ghost town, an abandoned hamlet where odd patterns of ash rain form a bruised, overcast sky and the locals are either dead or ought to be. When Sharon goes missing after a mysterious automobile accident (everything's mysterious in Silent Hill), Rose wanders through an increasingly threatening hellscape in search of her daughter, while her husband (Bean) searches in turn for both of them. Silent Hill's main attraction – for genre fans, certainly – lies not in its plot nor in its characters (you could place anyone in this particular township and whatever might happen, you could be sure it'd be unnerving), but in its relentlessly nightmarish imagery. It's dreamlike in the same way Herk Harvey's 1962 fugue-film Carnival of Souls is dreamlike; it moves, plotwise, according to its own internal, nightshade logic, or lack thereof, and parts of it burrow under your skin and worm around for a while. All of this is abetted by a pitch-perfect score from Jeff Danna and Akira Yamaoka, which alternates between the aforementioned industrial clanging and some broody piano melodies straight out of Stefano Mainetti's score for Fulci's The Beyond. The whole bloody affair has a decidedly Euro-horror feel to it, in fact, a gambit which pays off well on the whole. Sweet dreams are most assuredly not made of this, but then again, it's nice to see Uwe Boll clotheslined out of the video game-adaptation running for a while by such a smooth creeper. 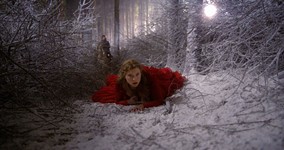 Brotherhood of the Wolf
Finally! The world's first historical romance-cum-horror movie-cum-chopsocky papal conspiracy epic! Films this schizophrenic come along once in a, um, blue moon, as it were, and ...