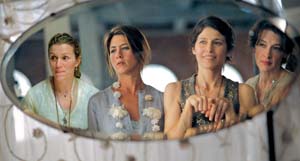 Nicole Holofcener has made a career out of riffing on Henry Thoreau’s famous truism that “The mass of men lead lives of quiet desperation” – only, because Holofcener most consistently trains her camera on women, that “quiet desperation” occasionally gives way to very loud, very public crackups. Her films – including Walking and Talking and Lovely & Amazing – are so insular and unassuming that it feels unduly burdensome to put so much on Holofcener’s shoulders, but the fact is: She’s one of the few visible female writer/directors working today, and, rarer yet, she makes smart, funny, painful movies that plumb the depths of female insecurity. Sure, female insecurity is the bread-and-butter of chick flicks, but Holofcener doesn’t make chick flicks. She doesn’t play her characters’ insecurities for sight gags, and she doesn’t prop them up with the rah-rah sentimentalism so common to movies made “for and about” women. She isn’t a bells-and-whistles kind of filmmaker – her strongest suit is in the smallest of details, and here, working with her largest (and best) ensemble yet, she creates a whole host of wholly human beings, walking and talking and terrifically damaged. Forget friends with money – how about friends with husbands, with kids, with mortgages and so-called life plans? That’s the short list of differences between Los Angeles-based Olivia (Aniston), a depressed, single stoner who cleans houses for a living, and her circle of affluent, slightly older friends. There’s Christine (Keener), a screenwriter whose marriage to her writing partner, David (Isaacs), is in shambles; clothing designer Jane (McDormand), thick in the throes of a midlife crisis and married to the maybe-gay Aaron (McBurney); and married housewife Franny (Cusack), the most monied of the lot and the happiest, too, or at least the only one regularly getting laid. Friends With Money follows the three couples and Olivia, forever the seventh wheel, as they navigate middle age in seemingly mundane ways – Christine and David are adding a second floor to their home, Jane has stopped washing her hair. (“What’s the point?” she asks her husband. “It just gets dirty and you have to wash it all over again.”) But it’s in these banalities that the characters’ quirks and the couples’ fissures are quietly revealed; that second floor becomes a battleground, the unwashed hair a signpost for Jane’s ballooning depression. Considering Holofcener’s expanded canvas and the film’s relatively short running time, it’s a wonder these characters feel so fully formed (not to mention near and dear) – again, it’s in those barely-there details of a casual foot rub, or a casually dropped cruelty, that a couple’s whole history is laid bare. The only weak link here is Aniston’s character – her Olivia, stuck in a holding pattern, feels like a holdover from Holofcener’s previous, single-girl pictures, and Aniston underplays the role to the point of expressionlessness. She’s a casualty of her character’s stoner haze and lack of direction, and the character can’t help but seem slight in contrast to her friends, the ones with money, husbands, and kids. Their desperation, quiet and otherwise, cuts to the bone. 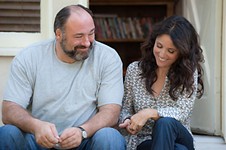 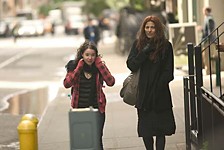