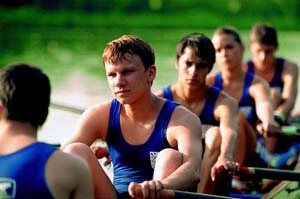 Isn't teen heartache confusing enough without adding into the libidinal mix a bunch of buff scullers nicknamed the Queerstrokes? Not to German director Kreuzpaintner, who fashions this clichéd, trite tale of youthful angst and sexual confusion into a torpid, slow-moving softcore fantasy of what, you know, really happens at those wild and crazy rowing camps that keep all of Bavaria abuzz. Of course, if this closeted Lifetime for Boys production is ever remade stateside – and yeah, that's sure to happen – I'm thinking lacrosse gear could be the leather set's next big couture on the bump ’n' grind dance floor. Like the hetero films it emulates in both tone and plotting, Summer Storm will likely most appeal to those in its target demographic, chiefly young gay men who may not yet be fully out of the closet. For everyone else, though, this is strictly a been-there, done-him proposition. Tobi (Stadlober) lusts for pal Achim (Ullmann), who is still conveniently stuck screwing in the proverbial closet lightbulb, while hottie Bachleda-Curus makes goo-goo eyes at her none-too-obscure object of desire, the aforementioned Tobi. Kreuzpaintner piles on the symbolism and subtext – a lone pine crashes to the ground and splitting up the lovelorn action as though it had been felled by one of Cupid's misaimed arrows ("I got wood!"), and more water sports than Titanic and Endless Summer combined – in such a way that the genuine honesty of the story runs aground amidst all the steamy horseplay and towel-snapping. Daniel Gottschalk's gorgeous cinematography accents the serendipitous nature of the eternal foreplay onscreen, but is that what you really want, or expect, from the DP on Teutonic industrialist band Rammstein's oh-so-Sturm und Drang video cacophonies? Nein! (I kept expecting one of this mismatched trio to burst into a rousing rendition of either "Du Hast Mich" or perhaps Einstürzende Neubauten's "Halber Mensch," but, sadly, it was not to be.) And, despite some convincingly polar performances from Stadlober (Tobi dark vs. Tobi light) and Kreuzpaintner's occasional visual flair – the splashy rowing sequences could be transposed into black-and-white and reinserted into Leni Riefenstahl's Olympia without too much difficulty – Summer Storm plays like a yawny queer-lite version of the oddest ABC Afterschool Special you could possibly imagine, now with added Queerstrokes.