Soap masquerades as high art in this south-of-the-border romantic drama, which has nevertheless proved a huge hit during its Mexican and Latin American release. Essentially a gussied-up telenovela, this film about a love triangle is predictable and thin, even though the actors are polished and cinematographer Andres Sanchez provides the film with a handsome look. Popular Peruvian novelist Jaime Bayly adapted his own work for the film’s screenplay but moved the story’s setting to Mexico City. Fellow Peruvian de Montreuil directs with a sure hand, although he’s unable to turn any of the three central characters into likable personalities. The likelihood of U.S. crossover success for La Mujer de Mi Hermano will rest primarily with Spanish-speaking audiences here that spark to its familiar melodramatic patterns and late-in-the-movie introduction of plot developments that involve abortion and homosexuality. After 10 years of marriage, Zoe (telenovela star Mori) has grown bored with her husband, Ignacio (Meier), and their glass-walled designer house. The marriage is relatively passionless (we learn that Ignacio will only make love to her on Saturdays), and though they wish to have a child it’s revealed that Ignacio is sterile. Ignacio’s brother Gonzalo (Cardona) is a painter, a womanizer, and something of a starving artiste, who lives off the money Ignacio gives him while thumbing his nose at the bourgeoisie. Soon Gonzalo and Zoe are sharing hot, illicit love. Despite the film’s title, which translates into English as My Brother’s Wife, the story is not told from Gonzalo’s perspective. Zoe’s choices are starkly opposite: Stay with her disinterested and compulsively orderly husband, or flee to the arms of his paint-spattered, prodigal brother. The story’s third-act complications are a bit more involving, yet the characters never come across as anything more than self-interested parties. It’s hard to have a rooting interest in any of their fates, and even less in the outcome of this movie. 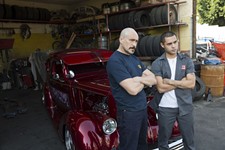