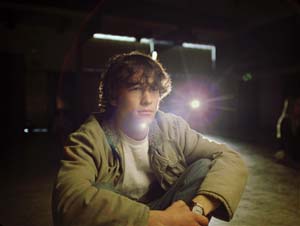 Talk about style to burn: Brick transfers Dashiell Hammett’s hard-boiled universe to the modern high school campus with nary a clue that more than a half-century has passed since the Continental Op’s heyday. Writer-director Johnson provides an original way to look at the world of high school with its bewitching young girls passing for femmes fatales and its lunkhead teen bullies filling in for professional mob muscle. There are drugs, and a kingpin, and an intrepid young hero cherchezing his mysteriously errant femme. Brick has a lot in common with noir outings of recent decades that have introduced modern elements like color or genre collisions to breathe new life into the form. Yet no matter how stellar Johnson’s re-creation of the noir universe is, Brick nevertheless retains a strong whiff of the artificial. It comes across as more of an exercise than an emotionally invested drama. The movie’s not quite into Bugsy Malone territory – in which tots are trumped up as substitutes for all the adults in a crime movie and the result proves just plain bizarre – Brick quite successfully pulls off its sleight of hand, but in the end the pieces don’t fully mesh into a believable whole. The staccato clip of the dialogue and the dated slang, although a good mimicry of Hammett’s style, seem out of place in the otherwise contemporary milieu of suburban high school. And just about the only adult we see in the entire movie is the assistant principal, who is played by Richard Roundtree – the original Shaft – in another tip of the hat to the detectives of yore. Keeping the dialogue and doomed noir atmosphere afloat are the terrific central performances by Gordon-Levitt and Haas. Gordon-Levitt already proved in last year’s Mysterious Skin his captivating command as a dramatic actor; with Brick he further demonstrates his remarkable dexterity and range. As the head of the local drug cartel, the Austin-raised Haas is a fearsome menace and fearlessly loathsome. Both actors undeniably deliver the goods. Although it’s not The Big Sleep, Brick is hardly a snooze. (See interview with Rian Johnson at austinchronicle.com/issues/dispatch/2005-10-21/screens_feature.html, conducted when Brick screened last fall during the Austin Film Festival.)