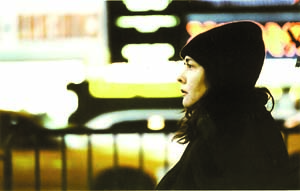 Last month’s Chronicle cover featuring the latest wave of Austin filmmakers limited itself to those with movies playing at SXSW, but any truly representative roll call of Austin’s newest generation would put Kyle Henry front and center. In fact, he’s been around a while – as a film programmer, a documentarian (American Cowboy, University Inc.), and an editor (Manito). But Room, which played at Cannes and Sundance last year and netted two Independent Spirit Awards nominations this year, marks new territory for Henry: his narrative feature debut. “Narrative” might be a misleading term, however, as Room bucks conventional storytelling models. The title, the tidiest thing about Room, refers to the site-specific hallucinations of a Houston-based woman named Julia (Williams). Already buckling under the strain of two jobs, a stressful home life, and debilitating migraines, Julia can now add “visions” to her laundry list of ailments. At the supermarket, in the living room – wherever, it seems – her perspective starts to go staticky, as if her reception’s going out, and she becomes bombarded by scattershot images of a warehouse-type room until she finally blacks out. When one of these episodes results in a car crash outside Houston’s George Bush International Airport (which may or may not be a sign), Julia flees her family for New York, on a sort of vision quest to decode just what the hell’s going on up in her alarmingly addled head. That quest takes her to odd places, like a meditation group and a tarot card reader. Julia spins on a dime if she senses something is a sign, and one of the haunting poignancies of the film is how hungry she, and we, are for anything remotely resembling a sign. And they’re seemingly everywhere, especially in the white noise of traffic reports and graffiti art and news dispatches from Iraq that blankets the film. (Note to self: If one suffers from sensitivity to the blaring pop-culture parade, then New York, and especially Times Square, may not be the smartest place to sojourn.) Justin Hennard and Chris Keyland’s sound design – dense, jittery, and spectacularly creepy – is one of the chief pleasures of the piece, and that soundscape, working in concert with PJ Raval’s terrific camerawork, create a constant, ever-upticking state of anxiety. There’s no rest for the weary – or the panic-attack-prone – here, and if you need further convincing, it’s scrawled all over Williams’ face. Dominating nearly every frame and communicating largely through her body language (watch her walk – it’s a revelation), Williams delivers an astonishing, open-faced performance, one that demands sympathy while steadfastly refusing accessibility. That inaccessibility – at least in broad strokes – extends to the whole film, which wears the skin of a psychological thriller, but plays out as something far darker, weirder, and more distancing. It’s easy to call Room an avant-garde film, but I think more significantly it’s an American film, in its paranoia and confusion, cultural branding and search for solace, and in a whole host of other ways I haven’t yet – and maybe never will – unpack. Near the end of the film, as Julia’s hallucinations grow more frenzied, I made a note: “There better be a big fucking payoff.” Guess what? There isn’t one. But that note – borne equally out of frustrated genre expectations and nerves nearly frayed by the film’s expert ratcheting of tension – speaks to Henry’s ability to burrow in and, well, frankly, to bother. For a film about looking for a sign, looking for solace, Room quite brazenly offers neither. It isn’t an easy film, but the world’s already got plenty of easy and easily digestible films. Nervy and confounding pictures, however, we could use more of. See austinchronicle.com/issues/dispatch/2006-04-07/screens_feature2.html for an interview with Kyle Henry and Cindi Williams.) 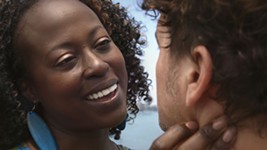 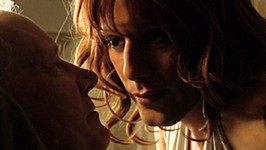