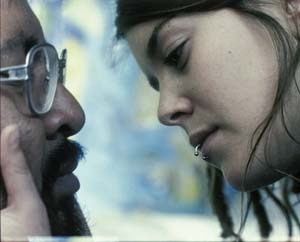 Battle in Heaven, Mexican filmmaker Carlos Reygadas’ follow-up to his impressive debut film Japón, was a hotly debated film at Cannes and Sundance, where it premiered prior to its U.S. release. All sides agree that Reygadas is brimming with technical ability and an artful sensibility. His movies seem drenched in a brutal realism that conveys an honest sense of contemporary Mexico. And whether or not you like Battle in Heaven, the film hits enough buttons to make you curious about what the director will do next. The film’s pallid emotional tone, which is in sync with the constancy of the dull gray sky overhead, can make it a hard story to embrace. I find it to be provocative without being especially meaningful: There are moments of raw power but what they ultimately indicate is beyond me. There are also sequences of graphically hardcore sexual acts – in fact the film opens with a long, discomfiting shot of a joyless act of fellatio. Hernández plays Marcos, a chauffeur for a general, who ferries around the commander’s young daughter Ana (Mushkadiz). He’s the only one who knows this daughter of the elite’s secret activity: working in a brothel, not for money but more likely the debasement it provides. Marcos also has frequent sex with her and one day offers the information that he and his wife have kidnapped a baby that subsequently died and he now doesn’t know what to do. Ana advises him to turn himself in to the police, but he instead turns to a higher power – God. That’s about it as far as plot, except for Marcos’ daily supervision at the police compound of the ritual raising and lowering of the Mexican flag – something that seems to go up and down as perfunctorily as his penis. Scenes are drained of drama, psychology, and, ultimately, import. The actors are all nonprofessionals, so in some measure the film’s poor definition may be blamed on them. However, this is really Reygadas’ show all the way. And what he’s delivered is a sad, tawdry picture in which all hope for salvation lies with God. (Screens Monday-Thursday only.)