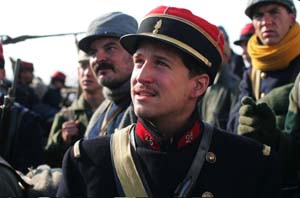 The title suggests a seasonal release, but this remarkable international production with a French creative team is very much of the moment, suggesting the futility of war by depicting the “Christmas truce” of 1914 from three sides in the battle. There’s a French regiment headed by a gun-shy lieutenant (Canet) homesick for his wife and newborn child. Fighting alongside the French is a regiment of Scotsmen containing two glory-seeking brothers (Steven Robertson and Robin Laing) and their parish priest (Lewis). In the foxholes opposite are the Germans, including a famous tenor (Fürmann) drafted as a private and his no-nonsense commanding officer (Brühl), who cares little for Christmas Eve – he’s Jewish, the movie notes in a moment no less ominous for its offhandedness, for viewers know what’s in store for him even if he survives World War I. Initially the units clash in a bloody charge on the German side, seen in a dreadful, sickening handheld sequence that follows the French infantry fruitlessly into a hail of machine-gun fire. (Kubrick fans may recognize the scenario from 1957’s Paths of Glory.) But as night comes, the three units fall into a delicate cease-fire, spurred on by the spontaneous drifting of carols through the still, snowy air. The sharing of music is a lovely moment in the film, and it exemplifies an interesting recent trend toward examining Europe’s modern history circumspectly, through a transnational lens. Joyeux Noël is tonally similar to the 2004 Nazi drama Before the Fall, and it too depicts individual men – conflicted, grieving, scarred, and terrified to kill or die – against the backdrop of political machination, and they will likewise discover that they have everything in common, despite their respective nationalities, and that they care more for each other than their governments care for them. The movie isn’t perfect – Spielberg-slick, its power is sometimes dampened by melodrama that overstates its message – but it is compelling and thought-provoking and topical as hell. 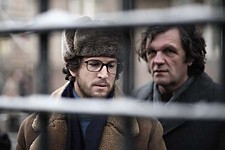 Farewell
Loosely based on historic events surrounding the end of the Cold War, this French espionage film shows how some spies are just regular folks.