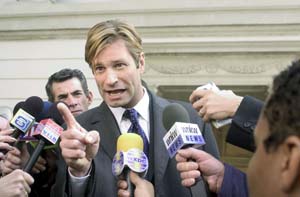 What could have been the cinematic equivalent of a rapier’s tip held to the pulsing jugular of the “Unholy Three” – the alcohol, tobacco, and firearms lobbies – is instead a snarkily playful little comedy that gets so wrapped up in its own barbed witticisms that it fails to land even the lightest sucker-punches on the black, bleak big business institutions it aims to skewer. As the embattled tobacco industry’s maestro of spin, Nick Naylor, Eckhart makes for a convincingly amoral scoundrel, lustily bedding the sassy newspaper reporter (Holmes) sent to profile him and appearing on talk shows with cheek to spare. His cohorts and regular drinking buddies, Polly (alcohol lobbyist Bello) and Bobby (Koechner, here shilling for the NRA), can’t hold a candle to him in terms of societal collateral damage, and thus, somewhere along the line, Nick is kidnapped by persons unknown and forced to endure his own nicotine hell. Reitman’s film (adapted from Christopher Buckley’s novel) is, like a tobacconist’s teeth, a spotty affair, dull and pitted, albeit with occasional bright spots that bring to mind some of the more conservative moments of the Coen brothers. Once Nick bonds with legendary tobacco kingpin (Duvall, chewing the scenery like some sort of hellish bipedal ruminant on Skoal) and is officially ushered into the arms of the industry for whom he speaks, Thank You for Smoking eschews biting social commentary in favor of farce, and the film’s promised tone – one of outraged, surrealistic agitprop – never recovers. Eckhart, as always, is excellent, latching onto the bruised emotional core of Nick’s womanizing esprit de corps and shaking it like some sort of crack-addled terrier. But for a film that’s ostensibly about modern American society’s love affair with addictive behavior – sex, drugs, rock & roll – its bark is much worse than its bite. (See austinchronicle.com/issues/dispatch/2006-03-31/screens_feature.html for an interview with the director.)