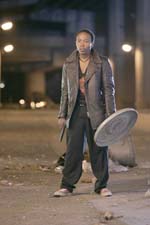 Winner of the 2005 Best Foreign Language Oscar, this South African entry is a harsh but ultimately redemptive tale of a young gang leader who lives in a shantytown on the edge of Johannesburg. The film is based on a novel written in the early Sixties by famed playwright Athol Fugard, and adapted for the screen by director Hood. In the title role, Chweneyagae, a newcomer who makes a strong impression, is identified only by the name Tsotsi, a word that translates as “thug” or “gangster.” He leads a gang of three others, who head out for their daily work of mugging, maiming, and occasional killing like others depart home for the salt mines (or in this instance, the diamond mines). Tsotsi is short of stature and quick of temper, alienating his steady crew after he irrationally pummels one of them senseless. Wandering about on his own (where he has flashbacks to his horrible childhood with his dog-kicking father and ill mother) he impulsively shoots a well-to-do woman and steals her car, not realizing that there’s a baby on board. But soon after he crashes the vehicle, he discovers the unharmed baby, stuffs it in a shopping bag, and trudges off toward home. Then one of those universal movie clichés takes over, again showing us the power of a helpless baby to soften the hardest of hearts. Though Tsotsi takes the baby to his shack, he’s completely unknowledgeable about attending to its needs: He tries to feed it condensed milk, uses old newspapers and tape for diapers, and shoves it under the bed to muffle its crying when he goes out – only to return to find the infant covered in ants. Frustrated, he randomly selects a nursing mother (Pheto) to suckle the baby at gunpoint. Over time, her fear turns to compassion, and she becomes a surrogate mother for both the baby and Tsotsi. If only redemption were as easy as this movie makes it out to be. The perspective Tsotsi provides of the impoverished South African ghetto is disturbing and humbling, showing families living in tin shacks with no utilities and abandoned children sleeping among discarded construction materials. There is much here that helps us understand how hopelessness can become a direct outgrowth of the dire situation. What Tsotsi fails to explain is how the mere introduction of a baby can melt the cruel cycle of criminality and disregard for others.