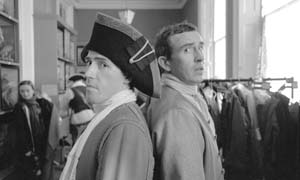 A quick skim of Michael Winterbottom’s large and varied body of work, and you might think he was an elitist, with two adaptations of Thomas Hardy novels (Jude, The Claim) and frequent forays into politics (Welcome to Sarajevo, In This World, the forthcoming The Road to Guantamano) and pop-music arcana (24 Hour Party People, 9 Songs) under his belt. But he’s never played egghead to the audience; there’s an accessibility to his films that belies their subject matter (some cried too much accessibility with 9 Songs, his 69-minute-long Brit-band performance piece that was broken up by that great unifier, honest-to-God fucking). Whether hunkered down in Sarajevo or the sci-fi futuristic landscape of Code 46, Winterbottom’s chief concern – and talent – is the illumination of human nature, with all the messes and occasional marvels it makes. And so it goes with Tristram Shandy: A Cock & Bull Story, a project that, on paper, sounds more than a little off-putting (something the tagline cheekily nods to: “Because everyone loves an accurate period piece”). It’s an adaptation of Laurence Sterne’s revered but little-read – at least by Americans and non-Ph.D. candidates – 1759 novel, previously believed to be unfilmable. Called a “postmodern classic before there was any modern,” Sterne’s chronologically wacked novel charts the accident-riddled conception, birth, and circumcision of nobleman Tristram Shandy, with detours that include Shandy’s Uncle Toby and his battle-injured groin. By all accounts, Sterne’s novel is nutty and ribald and utterly defiant of conventional storytelling techniques … hence this adaptation’s wonderfully meta take. We’re not watching a straight adaptation, but rather a beleaguered crew’s attempts to film an adaptation. British comedy star Steve Coogan plays Tristram Shandy; Shandy’s father, Walter; and a fictionalized version of himself (albeit one that is in some part informed by Coogan’s real-life tabloid dalliances). Coogan (the character) is swimming in it: fighting off predatory journalists, jockeying for leading-man credit with his pleasingly dimwitted co-star Rob Brydon (Brydon), and struggling between two very different impulses – to woo the comely PA, Jennie (Harris), or to play dutiful provider to girlfriend Jenny (Macdonald) and their newborn son. At first, the film’s three threads – the straight Sterne material, Coogan’s domestic troubles, and the travails of moviemaking – appear to exist on separate planes, with very funny stuff to be found on all three levels. (Although movies about moviemaking may seem like a tired business at this point, Tristram Shandy’s noninsider tone is more gently exasperated than, say, the scabrous The Player, and the film’s frequent use of music from the likes of Barry Lyndon, Amarcord, and Smiles of a Summer Night makes for an inevitable, instant nostalgia.) But eventually, the threads begin to knot into thematic coherence, most especially in the film-within-the-film’s examination of parenting. Quite astonishingly, amidst all the chaos – and there’s no better word for Tristram Shandy’s inspired, breakneck madness – what emerges is a featherlight, moving meditation on new fatherhood. I say featherlight in that there are no plunking life lessons to be had – Winterbottom’s never been a scold, either – indeed, the only time anything goes plunk here is in the film’s abrupt conclusion.