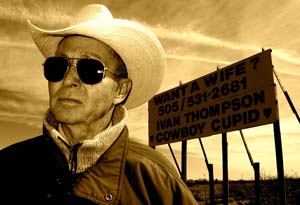 AFS@Dobie Ivan Thompson is a piece of work. For 16 years this "Cowboy Cupid" has been introducing marriage-minded American men to Mexican women. Well, that's one interpretation, anyhow. Thompson calls it the "woman business": rounding up the fittest specimens and brokering them, just like ranching. "Las gringas want lots of things," he explains, and American women are "too hard to please." So we follow Thompson and a client, a truck driver who for $3,000 wants "almost a love-at-first-sight kind of feeling," to Torreón, where they place want ads (no more than one child, no more than 130 pounds, and "no vices") and wait for the brides to turn up. I probably don't have to tell you Thompson is a real son of a bitch, but he's a truly fascinating nonfiction character, and Ohayon's storytelling is rock-solid. She holds Thompson's feet to the fire once or twice, but really this is a love story set in an ideological minefield with a most unusual yenta: a craggy, bowlegged New Mexico cowboy who compares himself to Christ when condemned for his business practices. There's seemingly no telling what he'll say in any moment ("If you do want to see me take my clothes off," he lips to the camera operator at bedtime, "could you please turn on some music?"), but he turns out midfilm to have a soft side. Maybe. I've seen a lot of documentaries lately, but this pick from last year's South by Southwest film festival (and winner of the Documentary Feature award) is a shining example of how the format can use character as a prism. In one beautiful segment late in the film, Ohayon and her editor, Kate Amend, cut between footage (by Hollywood cinematographer Theo van de Sande) of two weddings, one on each side of the border. The result is a lyrical contrast of two contiguous cultures, worlds apart in their definitions of family and love but brought together by mutual awe and basic human need. (Ivan Thompson will be present for a Q&A following the 4:30 and 7:30pm shows Friday-Sunday, and will be selling copies of his book Cowboy Cupid (Mail Order Brides and Other Tales From the Desert South) in the lobby.)