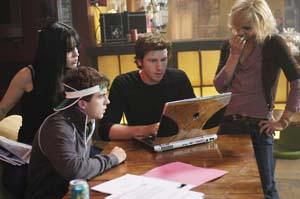 Remember when Atari’s Pong first arrived on the scene but your parents wouldn’t buy you one because they believed it was somehow, you know, dangerous? Like, if you sat too close to the “tee-vee” for too many hours playing with yourself (Single player mode! Hell yeah!) you’d, like, die or something? Dude, they were so right. My Pong days are, sadly, well behind me now (not so, single player mode – hell yeah!), but the real world has finally managed to catch up – barely – with my genetically encoded need to see pixels, like, move around and shit. Contrary to the hopes of geeks everywhere, Stay Alive is not a Peter Jackson-helmed, all-zombie musical remake of Sly Stallone’s 1983 sequel to Saturday Night Fever, but is instead a fatuous and dull horror film about gamers that inspires exactly the same amount of feverish intensity as Pong without the ball. “Stay Alive” is the name of a demonic video game that kills off its players in the same way their avatars die during gameplay – which just strikes me as a bad marketing move, demonic or otherwise. More exasperating to both genre fans and gamers, however, is the film’s insertion of real-life hobgoblin Elizabeth “the Blood Countess” Bathory. What this blood-bathing Hungarian sadist is doing invading these gamers consoles is anyone’s guess, but the PG-13 rating all-but-guarantees a dearth of the crimson grue. What we’re left with is a gaggle of bizarrely clueless gamers soon to be dispatched in painful and painfully predictable fashion: Goth girl October (Bush), Everygamer Hutch (Foster), future Comp USA manager and resident-brainiac Swink (Muniz), über-gamer Phineus (Simpson), and, oddly, former Hebrew Hammer Adam Goldberg. Implausibly tedious, Stay Alive has none of the vicarious thrills of, say, Konami's Silent Hill 2. It’s barely even Pong unplugged.