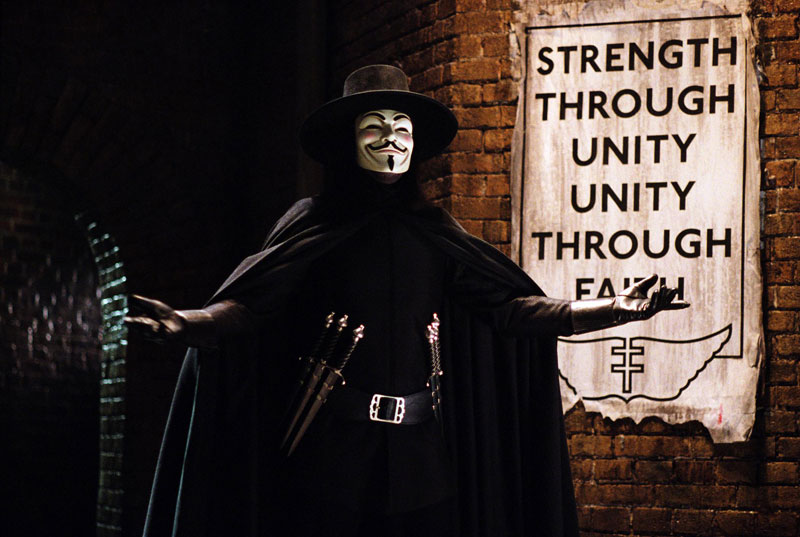 “Are you, like, a crazy person?” asks Evey Hammond (Portman), moments after being rescued from the post-curfew clutches of a pair of government enforcer/thugs by the swashbuckling, masked enigma known only as “V” (Weaving). As it turns out, he is – the Guy Fawkes mask cloaking his face, with its postcoital Mona Lisa grin and echoes of powder-kegs past is a dead giveaway. He’s also the last virulent gasp and raised fist of rebellion amidst a cowed and broken British citizenry in the year 2020, a place we quickly discover is at once heavily, obviously redolent of the fascistic stink of George Orwell’s 1984, and, in the film’s most unnerving moments, a place with eerie parallels to the one in which the world – the real world – currently finds itself. “America,” we are told, is now “the world’s largest leper colony,” brought to its knees by terrorism, plague, and all manner of not-unimaginable crises. England, however, has endured, thanks to a contrived rise in jackboots and truncheons and the rebirth of outright fascism in the wake of its own horrific terror attacks. (It’s interesting if not entirely relevant to note that in a grim moment of art and reality going head-to-head, V for Vendetta’s initial release date of November 5, 2005 was pushed back to its current slot in the wake of the London bombings of last July.) V himself is a terrorist (or, if you prefer, a freedom fighter), and he proves it by blowing up a major British landmark moments after saving Evey’s life. He then commandeers the airwaves and invites the shellshocked citizenry to stand beside him in exactly one year when he will blow up the Parliament and thereby, hopefully, shatter tyranny’s stranglehold on his country. All of this is a prelude to one of the most eloquent tales in ages of dysfunctional love – between a man and his ideals; between a country and its government; and, in the end, between Evey and V. Scripted by the Wachowski brothers (the Matrix trilogy) and adapted from the graphic novel by Alan Moore (Watchmen, who, in a fit of pique too complicated to go into here, has since had his name removed from the film), V for Vendetta is first and foremost a futuristic slice of pop-culture agitprop, replete with a costumed antihero, lovingly choreographed action sequences, and a terrific, rousing score by Dario Marianelli. It’s also rife with cunningly ornate dialogue – the hyper-literate V is as skilled with his tongue as he is with his more prosaic ordnance – and most enchantingly, a surplus of smarts. This is a thinking person’s action film and all the more entertaining for it. Heroic sloganeering abounds: “People should not be afraid of their governments; governments should be afraid of their people” and “A revolution without dancing is a revolution not worth having,” the latter nicked from feminist Emma Goldman, are two of the more memorable (and accurate) ones. It’s also a slam-bang piece of popcorn entertainment. Like its titular revolutionary, it is not, however, without its faults, chief among them a muddy narrative through-line and Hurt’s gnashing, overkill performance as the Big Brother-esque Chancellor Sutler. That’s balanced by one of the most exquisitely nuanced performances Portman has ever offered – she’s as radiant and revolutionary as the Statue of Liberty and her innate humanity carries the film across its weaker and more pedantic potholes. Whether V for Vendetta, the tale of a girl and her terrorist and the homeland they both love and revile in equal measure, withstands the test of time and becomes a pop-culture cinematic touchstone remains to be seen. What it has for certain, and what it has in spades, are some very real ideas. And, to paraphrase this V fellow, ideas are box-office-proof. 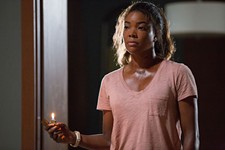 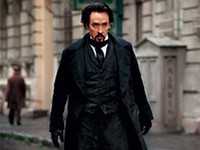