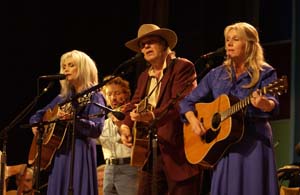 In this sushi age of methamphetamine concert DVDs and dysfunction junction music tell-alls, Jonathan Demme dreams us back to the golden age of performance films. Like Martin Scorsese, another modern classicist, Demme already counts a musical one-of-a-kind in his catalog: the Talking Heads’ eternally big-limbed Stop Making Sense (1984). The director’s bow to fantastical odd-duck cum minstrel Robyn Hitchcock in 1998’s Storefront Hitchcock disarms as well. With Neil Young: Heart of Gold, the Oscar-intimate rock & roll enthusiast not only records another The Last Waltz – figuratively speaking, in this case – he does so with a languid visual sonority rarely glimpsed since the days of Monterey Pop and Woodstock. The moment may have since passed into history, but through Demme’s deep-breathing cinematic exercise, you’ll always remember it in slow motion. D.A. Pennebaker and the Maysles brothers schooled future music documentarians that right place/right time dynamics occur in the unfolding of any act or event worth preserving, personal or societal. In this case, the disruption of Neil Young’s mortality unfolds with all the subtle poignancy of a man in deep contemplation and remembrance. An evolutionary leap and/or conclusion to Young’s Harvest album trilogy, 2005’s Prairie Wind was born, in part, in the aftermath of his father’s death (“for daddy” reads the last screen credit), and in the midst of his own well-documented bout with a brain aneurysm. The album ambles through its stations of life like family history passed down on a farmhouse porch, and Heart of Gold follows western suit. “I think of it as his life passing before his eyes,” admits Young’s wife Pegi during an opening series of interviews, which quickly dissolve to the album’s live debut at the former site of the Grand Ole Opry, Nashville’s Ryman Auditorium. Iconic in his cowboy hat and gray suit, Young’s every look, lyric, and vocal delivery focus and fade across the screen in the same manner. A full-screen close-up of Young emitting his precious falsetto on the-title-says-it-all “Fallin’ Off the Face of the Earth,” recalling his father’s dementia in the intro to “Prairie Wind,” and the look he gives Pegi in dedicating “Here for You” to their daughter (“There was a time I used to write these songs for girls my own age”) all ache in real time. Same goes for Young’s tribute to Hank Williams in “This Old Guitar,” a duet with vocal sage Emmylou Harris, as well as Demme’s other all-encompassing close-up of his subject on Prairie Wind closer “When God Made Me.” Neil Young: Heart of Gold could easily end 10-13 minutes earlier on its titular favorite, but ultimately, this chronicle of the human condition set to music will only rise in value and statue over time. (See austinchronicle.com/issues/dispatch/2006-03-10/screens_feature13.html for our interview with Demme and Young.)