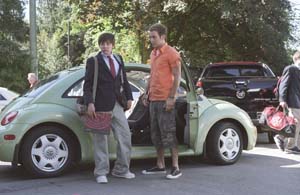 Shakespeare’s Twelfth Night gets a teen-movie rehash in this manic panic of a mess that never rises to even the lowest levels of the Bard’s cross-dressing comedy of errors. Shipwrecked on the shores of director Fickman’s penchant for having his teen ensemble drive their lines home with the walloping force of a football to the forebrain, the film is nearly saved from its jittery, often outright farcical overeagerness by Bynes’ chirpy, cheeky turn as her own brother, Sebastian (Kirk), whose identity she assumes in order to hone her football skills (and by football, we of course mean soccer) and prove that girls are every bit the equal of their male counterparts on and off the pitch. The inclusion of real-life footballer Jones (late of Lock, Stock and Two Smoking Barrels, not to mention Chelsea, Sheffield United, and Leeds United, among other rough-and-tumble British football clubs) is a bizarrely appropriate touch, but She’s the Man’s optimal demographic of 'tween and teenage girls isn’t likely to recognize the hulking, hooliganistic Jones for the astonishing footballer he once was. As Bynes dons drag and strives to ape the mannerisms of the modern American male – apparently urban slang is still the rage, homie – she manages a decent sense of comic timing and googly-eyed anti-aplomb. Not so the rest of the cast, although casting a tarantula as Malvolio is a masterstroke not even I would have dared. (Indeed, this reviewer was thinking more along the lines of The Fall’s Mark E. Smith, or, possibly, the late Ian Curtis. But then, I suppose that’s why I’m writing about films and not directing them.) With its knotty skein of misplaced affections and teenage angst failing utterly to reach the requisite naughty zenith, She’s the Man comes off like the pilot for a new Nickelodeon show, all ham-fisted humor and pint-sized longing, with Mr. Show’s David Cross thrown in for bad measure. This isn’t the worst thing you could send your teen off to – there’s always Gitmo for that – but its kooky hybrid of slapstick gender jokes already had whiskers on ’em in Shakespeare’s day. Bynes, with her Fugu cheeks and tomboy flair, is a gifted comedienne, but by the end of the film you feel as though you’ve been sitting there for 12 days and nights.