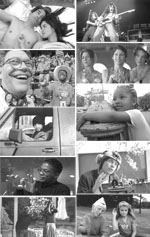 The SXSW Film Festival continues through Saturday with lots of screenings still to unspool. Of the three films opening for theatrical runs in Austin this weekend, two – Neil Young: Heart of Gold and V for Vendetta – have had sneak peeks at SXSW and are highly recommended by our reviewers. Many music-related features and documentaries also remain to be screened, along with a couple of films in the Kris Kristofferson retrospective, including Cisco Pike and 1984's Songwriter – one of the most illuminating studies ever of the corrosiveness of the music business. Look in this week's Screens section of the Chronicle (as well as the upcoming dailies Thursday-Saturday) for articles, interviews, schedules, and reviews. Also refer to sxsw.com/film for further details about the films.