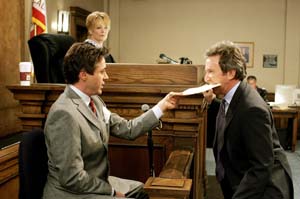 I’ve always had a soft spot in my heart for Disney’s original 1959 version of this “dog bites man bites dog” tale, thanks in large part to the retro-iconic status afforded the great Fred MacMurray, who parlayed the bewildered-but-lovable pop schtick better than anyone this side of my own father (this quite apart from the genius of Double Indemnity). Adding the dreamy Annette Funicello to the mix (and let’s be honest –there’s no more apt adjective for Disney’s once and future Queen of the Beach) just made Disney’s first live-action family comedy feature all the more attractive. Nowadays the original seems all the more surreal, but viewed through the cinematic blinders of Generation X and beyond, the story of a lovesick teen morphing into a drooling mound of fluff was and is oh-so-apropos. Surprisingly, this remake, which shuffles the original teencentric storyline into one more focused on the harried workaday world of overachieving adults and misplaced familial priorities, is an above-average mouthful of cinematic kibble. As Los Angeles' star district attorney Dave Douglas, Allen mines his borderline insufferable Everyman quirkiness (thankfully going light in the grating, faux-folksy wisdom and attending homilies) and finds a suitable home for it in the shape of Shaggy, a “Tibetan Wonder Dog” who has been kidnapped from his monastery – where he divides his doggy days between Buddhist prayer sessions and pickup games of fetch with the young monks-in-training (a mixed blessing, the “peeing on the mandala” gag never arrived) – by evil pharmaceutical-company mouthpiece Dr. Kozak (Downey Jr/, in a heretofore untapped Snidely Whiplash mode). Allen’s D.A., who’s midway through prosecuting an Animal Liberation Front-type case and drawing the ire of his idealistic offspring (Grey, Breslin) and wife (Davis) because of it, is bitten by the mystical canine and promptly begins turning into a dog (as opposed to dawg) whenever someone sails a Frisbee or yells, “Sit!” I’ve never particularly warmed to Allen’s broad, Home Improvement line of comedy, but he does dog just fine. One particularly choice sequence has him discovering the overwhelming olfactory sense canines possess, and to the credit of the film’s multiple screenwriters (I counted five, but there were likely more) there’s nary a leg-hump in sight. Will the superlative D.A. and bad dad be reformed in time to see the error of his ways (and just as important, will he figure out that his only son would rather sing the lead in the school production of Grease than be a star tailback? Do dogs rock? They do indeed.) There are precious few surprises here, but parents will find director Robbins’ breezy remake a painless affair and, judging by the yowls of laughter from the peanut gallery at the screening I attended, the kids will be barking all the way home. (Generally a good thing, considering the alternatives.)