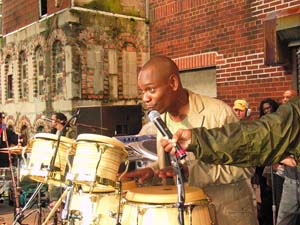 MC Dave Chappelle knows how to make a happening. The party documented in this film was thrown by the richly rewarded Comedy Central show host well before the occurrence of his much-publicized disappearing act prior to the start of last year’s shooting season. His block party is a loose affair, with a feeling of spontaneity that extends to the film as well. The movie is a blend of comedy, music, and just plain hanging-out time that can’t really be described as a concert film, although it does feature some great performances by Erykah Badu, Mos Def, Kanye West, Dead Prez, Jill Scott, the Roots, and a reunited Fugees. As great as it is to see choice moments like the film’s scorching West performance of “Jesus Walks” or Lauren Hill’s moving rendition of “Killing Me Softly” or Badu chucking off her mightier-than-Angela-Davis ’fro in the midst of a rainstorm, Block Party’s most memorable scenes belong to the impromptu comedy of Chappelle. Although the party is set to occur in Brooklyn’s Bed-Stuy neighborhood, the film opens with Chappelle on his Ohio home turf handing out golden tickets to passersby that include entrance and round-trip bus transportation to the NYC show. His off-the-cuff joshing with local residents and shopkeepers – black and white, young and old – entertainingly demonstrates his quick wit and universal appeal. The highlight, of course, is his invitation to an entire college marching band he encounters while out recruiting and his spontaneous offer to hire two extra buses to haul the excited corps and their instruments to the Big Apple. The show itself is presented in snippets and is broken up with footage of the preproduction planning and rehearsals and shots of the general party scene. Chappelle is seen casually visiting with the students at the neighborhood nursery school once attended by Biggie Smalls and the dotty white couple that owns the ramshackle building in front of which the block party is being held. For all the visual flair associated with his feature film work, director Gondry sticks with the tried-and-true perfected during his years of shooting music videos. Along with his Eternal Sunshine of the Spotless Mind cinematographer Ellen Kuras (who is also the DP of Jonathan Demme’s Neil Young: Heart of Gold, in current release), Gondry shoots the block party in a straightforward style that provides more a feel of the overall gestalt than the details of the location, lineup, or physical setup. No background material is going to help the viewer who isn’t already aware of why a Fugees reunion is such a cool thing to witness, but it’s impossible not to get caught up in this party’s good vibe.