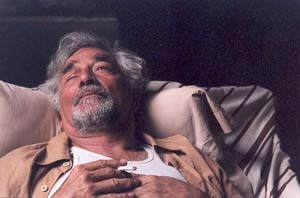 Heretofore, Harvey Pekar’s American Splendor comics were my only association with the depressive soliloquies of Cleveland’s denizens. Now, Three Days of Rain, a drama of semi-intertwined vignettes about a half-dozen or so depressed people living in Cleveland, makes the city seem like one of the saddest places in America. The film is written and directed by UT and Longhorn football alum Meredith, who says it is based on the short stories of Anton Chekhov. I imagine the inspiration is loose, however, as whatever stories the film draws on have been modernized and Americanized, although the Chekhovian interest in the relationships among people and his ability to turn the banal into something revelatory are all here in Three Days of Rain. The film is full of little moments of insight and depth, which unfortunately resonate with more quiet truths than the whole movie does when assembled together. These moments tend to work better than the film’s more obvious statements. The title lets us know what we’re in for: a relentless soaking in the world’s difficulties, which will be ameliorated at the end of three days. Meredith’s models are films like Robert Altman’s Short Cuts and Paul Haggis’ Crash. In a nod to Altman, Meredith even uses Altman regular Lyle Lovett as the radio deejay whose voice and jazz music unites the disparate characters. The performances are uneven, as skilled turns mix with less polished deliveries. The director even casts his father Don Meredith – yes, that one – as a cab driver whose travels unite some of the characters. Falk charmingly chews the scenery in his role as a drunk trying to restore contact and perpetuate new cons on his grown son. Avari stands out here as a husband whose entire life with his wife is called into question when she refuses to hand over the dessert in her doggie bag to a panhandler in the street. Other stories are less vivid. In fact, some of the film’s most memorable moments come from brief cameos delivered by Blythe Danner, Jason Patric, and underground filmmaker George Kuchar (as a newspaper vendor). The rain-slicked streets look like outtakes from Taxi Driver while the baleful jazz plays on the soundtrack and the deejay reminds us of how the rain washes the dirt from the streets. As a filmmaker, Meredith has a strong, if derivative, visual sense, although his screenplay is packed with too many clichés and familiar riffs. Meredith previously wrote the screenplay for Wim Wenders’ yet-unreleased political parable Land of Plenty, and Wenders returns the favor here by presenting the theatrical release of Three Days of Rain. 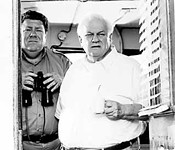 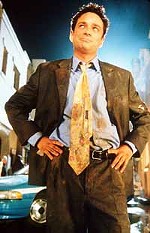 Corky Romano
SNL cast member Chris Kattan should have been in silent comedy. He has the Silly Putty face of those old slapstick stars, and a sing-song, ...