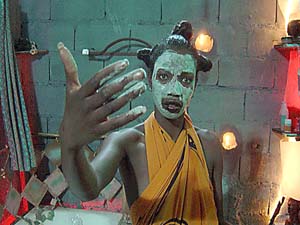 AFS@Dobie Les Saignantes is a Cameroonian-French science fiction satire with Godardian intertitles that is as fascinating as it is obscure around these parts. Although the production values of this digitally shot film are threadbare, the bizarre visions of writer-director-editor Bekolo are not. The title, Les Saignantes, translates as The Bloodettes, which seems to be the name of a group of high-level prostitutes (one of whom can be seen engaging in a harnessed and gravity-defying sexual encounter/dance in the film’s opening scene). The futuristic story is set in Cameroon in 2025, but this Westerner would be hard-pressed to tell you how the neo-noir images differ from the Cameroon of the present. When the secretary general with whom she’s having sex in the opening sequence dies in her bed, Majolie (Ado) calls up her best friend ChouChou (Calmel) to help her get rid of the important official’s body. The rest of the movie follows them from one escapade to the next as they attempt to complete their mission and a different high-ranking government official sees an opportunity in their plight. Les Saignantes seems more magical than futuristic, as events continuously occur that defy logic and physics. And indeed, there’s another factor at work: something the characters call Mevoungou, which is never quite defined but appears to be some kind of all-powerful force that shapes events and is controlled by women and new communities of people who gather in funeral homes. The pervasive jump cuts used throughout are another tip of the hat to Godard. Along with the intertitles, the abundance of crooked politicians and the trading of sexual favors all point to Bekolo’s radical political commentary, an aspect that has gotten the film into trouble with Cameroon’s censorship board. Ado and Calmel are delightful as the two sexually powerful central characters, who appear in almost every frame of the film, at times recalling the magical Celine and Julie of French cinema. By the film’s end, they begin to resemble African, girl-power ninjas – but maybe it’s just the Mevoungou at work. Filmmaker Jean-Pierre Bekolo will be in attendance at the 7:30pm screening on Friday.