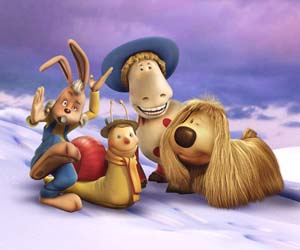 What hath Shrek wrought? The ground-breaking 2001 animated film broke the mold, subverting the traditional Disney formula of white-bread romantic leads and their anthropomorphic animal pals with abundant pop-culture references, jokester dialogue, and the occasional flatulence joke. What was fresh then, however, is old hat now; it seems that if every animated film these days tries to imitate Shrek in the hopes of matching its phenomenal financial success. The international production Doogal is no exception. If this animated feature is indicative of how countries come together to achieve a common goal, then the world is in big trouble. A clunker if there ever was one, Doogal is so mind-numbingly incoherent that parents and children alike will find themselves dazedly staring at the movie screen wondering what the heck is going on. Ostensibly based on the venerated British children’s television series The Magic Roundabout, this lamely executed telling of the quest to find three magic diamonds that have the power to block out the sun and freeze the world is peppered with references to Pulp Fiction, pop songs, and – yes – the occasional flatulence joke, but none of it is remotely funny (much less entertaining). The computer-generated animation in the film is rarely interesting, particularly in its conceptualization of the film’s characters, all of which have the comic dimension of stick figures. The titular character is a shaggy cocker spaniel that looks like the canine offspring of Cousin It, a dog so annoying and unlikable that he could easily become the poster mutt of animal haters everywhere. Perhaps the most shocking thing about Doogal is the participation of Stewart, who provides the voice of the evil wizard, Zebedee. The visual of Zebedee bouncing around on a spring body and shooting cosmic rays from his handlebar moustache is bad enough, but to listen to the usually hip Stewart recite one unfunny one-liner after another is absolutely painful. (This experience could provide much fodder for Stewart on The Daily Show for years to come.) A wretched experience from start to finish, Doogal may make you long for the days when Snow White sang about her prince and little furry animals made cute. 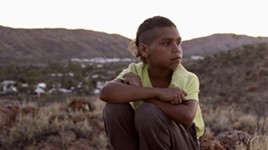 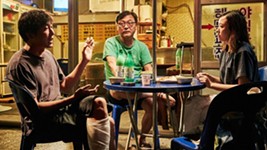