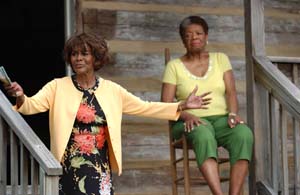 Mable “Madea” Simmons – the comic invention of playwright, actor, and director Tyler Perry – is a Southern, African-American version of Dame Edna, right down to the pendulous bosom and glossy fright wig, but the similarities are more than skin- (or prosthetic-) deep. The nosy and stern-but-loving materfamilias is a venerable character that never seems to lose its usefulness, if not its charm. In this sequel to 2005’s Diary of a Mad Black Woman, Perry ups the ante for his creation by infusing the good-natured homilies with more than a bit of bite, adding in Underwood’s Carlos, an up-and-coming Atlantan attorney whose debonair panache conceals the spousal batterer within. As luck would have it, the scoundrel is engaged to Madea’s beloved niece Lisa (Aytes), who sees a possible savior in Frankie (Kodjoe), the chiseled neighborhood bus driver and artist, who drops butterscotch-smooth compliments the way other men drop shoes. Meanwhile, back in the land of sass, Madea is forced by circumstance to become a foster parent to Nikki (Palmer), an unruly teen from a broken home, who soon straightens out and becomes, to no one’s surprise, a model of teenage deportment, thanks to both Madea’s keen child-rearing skills and her nervy, often over-the-top ability to scare the bejesus out of anyone foolhardy enough to believe there’s any way but hers. Also on board in what turns out to be the titularly crowded, final-act reunion are Madea’s crotchety brother Joe (Perry, again), Lisa’s conniving mother Victoria (Whitfield), who needs the brutal-but-wealthy Carlos in the family to maintain her glitzy but morally bankrupt standard of living, and, last but absolutely, positively not least, Maya Angelou and Cicely Tyson, who, in a bizarrely opportune pair of cameos, end up chatting around the kitchen table while Madea watches over her extended flock and doubtless plans her next move. Considering the popularity of the Madea character and the wholly inoffensive lightweight sermonizing that runs through the whole of Perry’s film, it would seem to be the perfect antidote to harried parents in need of some quality cinema time with their own offspring. But, of course, there’s the flatulence and sex jokes – courtesy of that old Buzzard Joe, to bring Perry’s ultimately noble attempt down to a more pedestrian level. That’s too bad. When you’ve got Maya Angelou and Cicely Tyson in the kitchen, laying on the sophomoric laughs is just plain stupid.