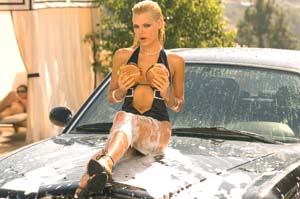 Boasting that your film features “two of the six writers of Scary Movie,” as this film’s marketing campaign does, is like bragging that you came in second in the annual Bulwer-Lytton Bad Fiction Contest. And having Date Movie on your résumé? That’s right up there with, say, “Bergen-Belsen Entertainment Coordinator.” (And as S. Gross so accurately put it: “That’s not funny – that’s sick.”) Fans of the creakily amusing but more often than not cringe-worthy Scary Movie franchise will find that, obviously, more than two writers are necessary to generate a modicum of yuks; any less, and all you end up with are yucks, and, it should go without saying, enough fart jokes to stifle even Eddie Murphy’s fetishistic output. Ostensibly a parody of touchy-feely-quasi-comedies like My Big Fat Greek Wedding and Meet the Parents, Date Movie plays even beyond the balconies to the streets outside, where it’s cold, wet, and desperately in need of a good diarrhea gag. Hannigan (Buffy the Vampire Slayer’s Willow, or, if you prefer, that girl from band camp in American Pie) plays Julia, a 239-pound Everygal searching in vain for her one and only True Love. With an assist from Cox (the Farrelly brothers’ diminutive regular), she embarks on an extended romantic quest and in the process allows the writers free rein to maul and maim virtually every recent romantic comedy you can think of, from Hitch to When Harry Met Sally. (What, no Vertigo?) Director Seltzer and his co-writer Jason Friedberg throw everything they can at the audience in the hope of generating laughter, but the only chuckles I heard arose when a screamy, apparently unchaperoned little wild child took a spill on the way to his seat and ended up with no popcorn for dinner – and those cackles emanated from yours truly. I’ve always said the best date movie going is a Last House on the Left midnighter in Times Square, but what with Times Square being what it isn’t these days, I’d also recommend Takashi Miike’s Audition – if possible in the diviest dive your local Little Tokyo has to offer. At least with spiky genre wild cards like these you’re guaranteed some fascinating conversational gambits on the rear end, as opposed to Date Movie, which, if you play your cards wrong, might just get you married with popcornless screamers in a flyblown double-wide somewhere to the south of Happy, Texas. 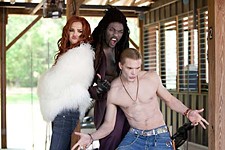 Vampires Suck
From the filmmaking team that gave us Disaster Movie and Meet the Spartans comes this inevitable spoof of teen vampire movies. 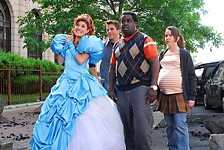 Disaster Movie
We're running out of genres to spoof: This time it's disaster movies.