I smell penguins, even though Eight Below's animals are really a pack of sled dogs. This movie's icy Antarctic wilderness also looks somewhat familiar, but Eight Below is a different animal entirely from last year's blockbuster documentary March of the Penguins. Again, however, we have a story about delightfully appealing tundra animals that, despite slight anthropomorphizing by their filmmakers, are certain to charm audiences of all ages with their instinctive natural exploits and distinctive appearances. Eight Below is inspired by the blockbuster Japanese film Nankyoku Monogatari, whose basis was the actual events that occurred during a 1957 Japanese Antarctic expedition. Eight Below tells the story of an American scientific outpost, whose human members are ordered to abandon the base when one of those "perfect storms" (that have become a movie cliché) is about to roll in. There is only room on the helicopter for the human beings, so their pack of eight dogs has to be left behind. 2 Fast 2 Furious' Walker plays Gerry Shepard, the expedition's guide and tender of the dogs, with whom he has a special bond. When conditions prevent a return for the dogs until the next spring, Gerry literally wanders the globe trying to raise funds for a rescue mission. One of his targeted backers is the scientist Davis McClaren (Greenwood), a geologist whose guided trek to find a particular meteorite occupies the first third of the movie. All the expected calamities befall the pair during their trek, and the strength, devotion, and resourcefulness of the dogs is shown to good measure during this eventful portion of the movie. After that, the dogs are on their own for the rest of the film, which at first seems like very awkward pacing as the tribulations of the dogs continue to be crosscut with Gerry's efforts to raise money back home. Gradually, as the speechless interludes of the dogs' nearly six-month-long struggle for survival continue, we come to realize that this is really a movie about the dogs rather than the humans who love them. The all-dog sequences are marvelous, so expressively are they shot (by Cast Away and Polar Express DP Don Burgess) amid the amazingly desolate and deathly environment. Their segments are really more engaging than the segments of human drama. Walker and Greenwood turn in acceptably rugged yet tender performances, while Biggs proves a delight as the film's comic relief. Bloodgood's fresh face, however, doesn't make up for her thoroughly meaningless role as the story's love interest, Katie. (Gerry, who calls his favorite dog Maya "my best gal," can be seen in a three-way tongue kiss with both his gals in one of the film's final images.) This is Marshall's first directing job since 1995's Congo, and Eight Below returns him to much the same territory as his 1993 film Alive. A top Hollywood producer with credits such as Raiders of the Lost Ark, Seabiscuit, and The Bourne Supremacy to his name, Marshall's sideline gig of directing action pictures in far-flung locales is something for which he has an obvious feel. With Eight Below he has created a family film that doesn't pander, preach, or poop out. That alone is a rare thing. 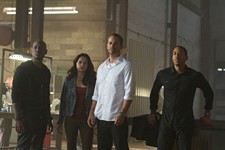 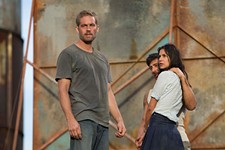 Brick Mansions
In one of his last roles, Paul Walker stars in this American remake of Luc Besson's actioner District B13.