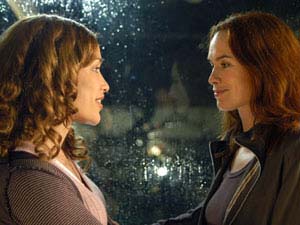 British Ensemble Romantic-Comedy Scenario No. 3: Broody bride sees attractive stranger at the wedding, questions the possibility of Love at First Sight. The wrinkle here is that the attractive stranger is Luce (Headey), the soft-butch florist. The bride is Rachel (Perabo, strangely credible as a Londoner after Coyote Ugly), and the husband is Heck (Goode), a sort of banker type who’s growing uncomfortable with office-tower machismo. There’s a cute little kid, a mopey single woman, a rakehell best friend who’ll never settle down, and some crusty old character actors (Imrie and Buffy’s Head, who’s delightful). The lesbian twist is the movie’s only really remarkable feature, although the actors are fine, and Goode makes a favorable impression as a likable guy trying to figure things out and make his marriage work. I’m hesitant to commend the filmmakers for making a real bisexual date movie, although that is an achievement, and the movie gives Luce and Rachel’s relationship plenty of romantic-comedy juice (they get a meet cute, a date montage, and a tense third-act miscommunication, just like the breeders do). It is refreshing enough that these people just fall in love instead of writhing in tortured coming-out agony: The problem is not that Luce is a woman but that Rachel is married. But the script is from Richard Curtis’ slush pile, and multiplex cliché is perhaps a dubious honor for the Love That Dares Not Speak Its Name. The obligatory precocious schoolkid (Johnston) should be digitally eliminated and a moratorium on mop-topped urchin sidekicks declared (think: Love Actually and About a Boy). She’s a perfectly acceptable child actor, but Parker has her constantly belching out cute, naive wisdom, like some kind of chorus. (If only children really existed to solve adult problems.) The ensemble parts aren’t very tightly constructed, and the supporting characters pop in and out of the action whenever the plot requires it, not because the filmmakers are invested in them. Imagine the movie without its same-sex hook, and its lack of substance is apparent. Imagine Me & You has its charms, but for a movie about loving radically, it sure plays it safe.