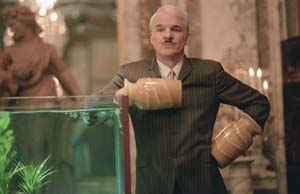 What has happened to Steve Martin's film career? It's nothing but remakes, sequels, remakes of sequels, and sequels of remakes. In this pointless rehash of the 1964 Blake Edwards film that introduced Inspector Clouseau to the world, Martin "re-imagines" (the word used in the press materials) the role of the bumbling French detective without a trace of the comic genius of Peter Sellers. He doesn't come close to reimagining Sellers' inspired nuttiness: His attempts at physical comedy fall flat almost every time, and his prissy and fastidious mannerisms never go beyond the superficial. Martin seems much too aware of what he's doing all of the time – he's a postmodern wild and crazy guy in a role that requires a real actor, one with a comic technique. (Even Martin's French accent – which has traces of Elmer Fudd and Colonel Klink in it – seems painfully calculated for laughs.) The film's script about Clouseau's investigation of a murdered soccer coach is paper-thin, which wouldn't be a problem if Martin and his cast were up to some real funny business. Most of the time, the storyline makes no sense, particularly in those scenes featuring the bootylicious Knowles, whose eye-candy presence here is nothing more than an excuse for a pop single. The casting of Knowles also underscores the fact that this incarnation of The Pink Panther has more in common with the Austin Powers series than anything in which Sellers and Edwards ever collaborated. (There's even a flatulence joke here, no doubt in deference to the snaggle-toothed British secret agent's brand of humor.) Director Levy, who foisted another lousy Martin remake upon the American public (Cheaper by the Dozen), is completely inept when it comes to comic pacing; the dead space between the film's feeble attempts at humor acts like a vacuum, completely sucking up every possible laugh, titter, and guffaw that might follow. Ultimately, one has to chalk up The Pink Panther to the good old traditions of Hollywood greed and chutzpah. Nothing this slapdash and badly executed is done for the love of movies.