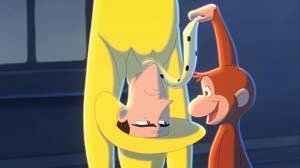 It’s not perfect, but this big-screen debut of H.A. Rey’s lovable monkey is worth recommending to audiences of all ages, especially fathers and sons. Lovingly rendered by executive producer Ron Howard’s Imagine Entertainment, the production is faithful to George’s gentle spirit while fully exploiting the possibilities of old-school, two-dimensional animation. Movies are magical, it suggests, and everything is beautiful and fascinating to children: the sheen of bubbles, mislaid and open cans of paint, a fistful of helium balloons, the power you have to provoke your parents by messing with something off-limits. Toilet paper can be unrolled all over the floor. You can break into a crate of bananas and stuff your face until you pass out. Everything looks slightly hyper-real, its size slightly exaggerated. But the movie also gets George's melancholy just right. For this is not a movie about a man and his monkey, but a movie about parents and children. Children know that the world is not theirs; they know they’re always breaking the rules by wanting the things in their hearts, and they know that they’re inconvenient and messy and sometimes cause their parents to become jobless and evicted and very, very sad. Parents know that they love their children but will always make mistakes in caring for them. But bumbling as parents are, it is still them alone their children want. The screenplay skims off some of the source material’s hinky bits in sending museum employee Ted (Ferrell) to deepest, darkest Africa in search of a legendary ape idol. Rather than pillaging the continent, Ted is trying to save his beloved institution from the meddling son (Cross) of the crusty old curator (Van Dyke), so that's probably okay, and the movie gives us a sarcastic native guide for the expedition. (Whenever Ted marvels at the African exotica, the guide retorts, “Yeah, I know. I live here.”) Enter playful George, who bedevils Ted with peek-a-boo and hops a steamer home to follow him. (Like most children, George is smarter than his parent but lacks caution.) There’s a sort of romance between Ted and a field-tripping schoolteacher (Barrymore) and a very simple plot about exposing Ted’s artifact as a fraud, but the story's best moments are its offhand ones: the tête-à-tête with upstairs neighbor Mrs. Plushbottom (Plowright, who is outstanding), a candy-colored workshop of robot toys, and George’s other little discoveries. Jack Johnson’s original songs are a bit heavy on the heartstrings, but you’d have to be made of granite not to be moved: Even the Daily Texan hipsters next to me chuckled along with the movie. There’s some winking humor (“We're already on a ship to Africa!” Ferrell crows. “What a time-saver!”) but George isn’t pitched above children’s heads – a tactic that makes for smarmy, inauthentic family animation. (Exhibit A: Chicken Little.) We have our usual absent-mother problem, and a scene of separation between Ted and George may be too intense for very young kids. But it is a sweet, simple movie with a sweet, simple message: that children see the world differently and have much to teach the people who love them.