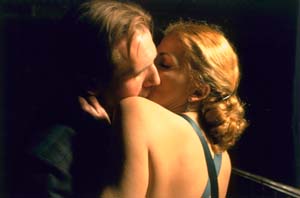 The final collaboration between director Ivory and producer Ismail Merchant, who died earlier this year, is a gorgeous slice of Merchant/Ivoryisms (thanks in large part to the lushly vertiginous cinematography of director of photography Christopher Doyle) that nevertheless fails to ascend to the giddily suave heights of the team’s greatest works, Remains of the Day and Howards End. That said, it’s no less a welcome respite from the fawning boorishness of, say, Big Momma’s House 2 for being just this shade shy of perfection. You certainly can’t blame Fiennes, who, as the blinded, fallen-from-grace American diplomat Todd Jackson (“the last hope for the League of Nations,” he’s dubbed), reaches deep into his repertory bag of accents and pulls out a doozy of an example of pre-World War II Yank-speak. It’s Shanghai, 1936, in the heady, debauched days before the Japanese invasion would spoil everything for everyone, and Jackson, who lost both his little girl and his joie de vivre in a recent train bombing, casts his damaged lot with the city’s underclass of equally bloodied but unbowed expat hookers, scoundrels, and emotional refugees. Establishing a nightclub-cum-bordello and naming it after the deposed Russian countess played by Richardson, Jackson and his newfound love rekindle something approaching humanity in each other, even as the pending Japanese invasion threatens to obliterate everything else. The White Countess moves with the stately speed of most Merchant/Ivory productions, which is to say too damn slow, but the film is snatched from the jaws of tedium by Doyle’s resplendently lush camerawork and Fiennes and Richardson’s spot-on performances, which echo the heartsick downward spirals of war-torn romances the cinematic world over. The script, by Kazuo Ishiguro (Remains of the Day), also, perhaps not inadvertently, echoes the great-grandaddy of wartime love, Casablanca, but – ahem – lacks that film’s epic subtleties. No matter. By sheer willpower (and some of the best art direction of this year or any other), this is a fitting, poetic epitaph to the life and career of Ismail Merchant. 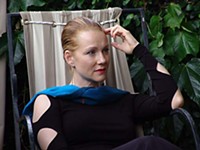 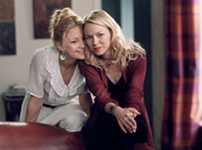 Le Divorce
The Merchant Ivory team say "I do" to romantic comedy.