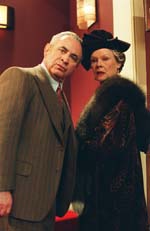 It’s hard to know what to make of Stephen Frears’ career these days. He goes from movies as piercing as Dirty Pretty Things and as raucous as High Fidelity to this staid British music-hall drama that seems calculated to earn Judi Dench lots of award notices. Mission accomplished on the latter score, and I don’t begrudge the Dame a thing. She’s very good and likable as the feisty dowager Mrs. Henderson, who buys a rundown London theatre to operate after the death of her husband leaves her bored and looking for an activity to fill up her time. Not the sort to cotton to a hobby like embroidery or ladies’ charity committees, Mrs. Henderson (based on a real person) wants something more involving to do with her life. It’s hard, however, to recognize the Frears of the gritty My Beautiful Laundrette and The Grifters amid all the aristocratic bearings of Mrs. Henderson Presents. The film’s story is quite slight and the characters, although potentially interesting, are underdeveloped. Opening during the years between the wars and ending during the blitz, Mrs. Henderson Presents is full of that stiff-upper-lip Blighty spirit. In short order, Mrs. Henderson hires the autocratic Vivian Van Damm (Hoskins) to be the theatre’s creative director, who in turn hires a gaggle of chorus girls to brighten their stage. When their first burst of success is copied by all the other London theatres, Mrs. Henderson wants to showcase nude girls as their theatre’s new hook. The reluctant Lord Chamberlain (Guest), who’s in charge of licensing shows, gives her the go-ahead on the promise that the girls remain static as in a living tableau. Many, many breasts are on display in this movie, which would probably be rated PG-13 but for the mammaries (and perhaps a brief empathetic display of some male frontal nudity – including Hoskins’ nethers). Yet there’s nothing arousing or quaintly entertaining about these displays, even though the musical stage numbers do have a bit of bounce. We learn little about any of the numerous characters, and the mechanics of the stormy working relationship between Henderson and Van Damm are teased rather than exposed. Some of the flavor of war-time Britain comes through, but it’s too little too late. We learn also that there’s substance beneath Mrs. Henderson’s flighty exterior – but didn’t we know this at the outset? Perhaps some of the problem lies in the film’s awkward mixture of drama, comedy, and music-hall numbers, but we should be able to trust Frears to overcome ordinary narrative difficulties such as these. Dench deserves better, and unfortunately it will probably be a long time before she gets another starring role in a movie custom-made for an actress her age.