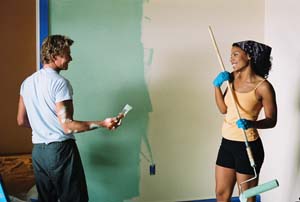 Something New at first feels an awful lot like something old, or at least familiar, with its easy-bake romantic-comedy trappings. Think Bridget Jones' lovelorn but marriage-obsessed single woman, only make her a neat-freak, not a basket case, and a comely African-American, not a plumpish, pasty Brit. Kenya McQueen (the terrifically appealing Lathan) is a power walker and a powered accountant about to make partner, with a powerful predilection for beige-ing everything in her newly bought single-gal pad. But her back yard's a mess: overgrown, sorely neglected, and as subtle a metaphor for her romantic atrophy as a hoe to the head. And who better to wield that hoe then Kenya's hot new landscape architect? (Romantic comedy, of course, isn't just about meet-cutes, but personal improvement and the weeding out of undesirable character traits via the intervention of a good man.) And yet, this is where Something New throws a curveball: Kenya, who has a very strict list of essentials for her IBM (that's Ideal Black Man), finally meets him in the form of her strapping gardener. She just wasn't expecting him to be so … white. Brian (Baker) is practically dipped in bleach, then set in bronze, from his golden-boy locks to the golden retriever sitting shotgun in his monster truck. Brian's a sensitive sort, fond of hiking and aw-shucks-isms like "I'm just a landscaper — I take hard earth and make things bloom." At first, his character's the butt of (some pretty funny) white-boy jokes; he then upgrades to a much-ogled piece of man-meat (also pretty funny). But give him time: He gets better, more game, and the same can be said for Something New. Once the film stops spinning its wheels in rom-com clichés, it gains traction and even a few moments of transcendence, especially in a scene in which the pair weaves in and out of a grocery store and most plainly speaks — then shouts — about their relationship dynamic as it sinks under the weight of their racial expectations and frustrations. But if first-time director Sanaa Hamri and writer Kriss Turner tweak genre conventions, they never toy with genre expectations — we're here to be wooed, after all — and Something New, in its endearingly daft third act, manages the neat feat of feeling sweetly inevitable rather than boilerplate predictable. The film has its missteps and some dangling threads (what the hell was Cheers' sad-sack postman John Ratzenberg doing ducking in the last frame?), but sometimes you have to go with the gut — or, in my case, a dumb grin — and, for better or for worse, give in to a good-feeling film. 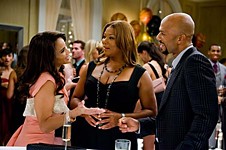 Just Wright
Queen Latifah co-stars with Common in this rote romantic comedy in which the only surprise element is the success of the New Jersey Nets. 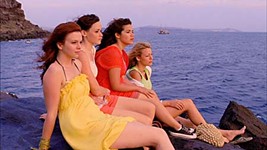 The Sisterhood of the Traveling Pants 2
Female camaraderie, nostalgic sentimentality, and emotional catharsis are back in this sequel: The film hits its marks but lacks real depth.