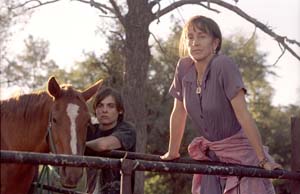 Bree (Huffman) wants nothing more than to be an ordinary woman. The last thing on her mind is being a father. But Bree is a preoperative transsexual who’s on the verge of surgically severing all vestiges of her heretofore life as Stanley when she receives her first notice of the existence of a 17-year-old son she sired during a college sexual fling as a man. Bree has been outwardly living as a woman in Los Angeles, awaiting imminent sexual reassignment surgery – the final step in her transformation. But her psychiatrist (Peña) refuses to sign off on the surgery until Bree makes contact with Toby (Zegers), the son she never knew she had, who is locked in a New York City jail and in need of bail. So with nothing more than the wish to fulfill her psychiatrist’s imposed prerequisites, Bree dips into her meager funds to travel to New York and bail out her son. Her conservative fashion sense causes Toby to presume she is a do-gooder missionary, a misconception she does nothing to dissuade him of. Her plan is to drive Toby to his stepfather’s home in the Midwest, although Toby’s plan is to go to L.A. to seek out his unknown father. Thus begins the odd-couple road trip, which is marred by several melodramatic and/or pointless potholes along the way. Huffman’s commanding performance in the gender-bending lead role is the primary reason to see Transamerica. It’s the kind of performance we love to love in which we can tangibly see the actorly process at work: The part has already earned the Desperate Housewife a Golden Globe. However, there is little beyond Huffman’s always fascinating turn as Bree to maintain our interest. Stops at Toby’s stepfather’s and later at Bree’s parents' home are arch and digressive. Writer-director Duncan Tucker does little to develop his narrative setup beyond the basic and obvious, and his film begins to feel more like an exercise than a fully realized story. We’re to believe that the process of learning to become a father will indeed make Bree a better woman, but unless there’s a sequel we’ll never learn the truth of that concept. 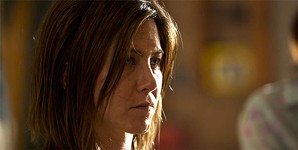 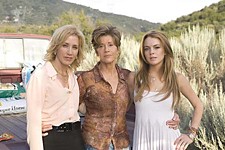