“There should be more movies like this,” opined one grandmotherly type to another at our screening. Based on Christianna Brand’s Nurse Matilda books and featuring an A-list cast of British character actors, Nanny McPhee is indeed something of a rarity: a movie for children that is about children and their world. There are no aliens in it, no cartoon animals, and no fast-food restaurants. (Partly this is due to the turn-of-the-century setting, but it’s also a matter of the film’s tone.) And while the kids – seven of them – are pretty much wisenheimers, they are not cooler-than-thou, and the adults in their lives aren’t blithering idiots, but flawed people who make mistakes until they reach a point of reckoning. However, to reach the movie’s very old-fashioned message – that families must cooperate, listen to one another, and respect one another, children and adults alike – the viewer runs a gauntlet of Edwardian slapstick, and I am sad to say that there are pigs dressed as women and a mule “cutely” animated with CGI. (The children in my audience were less obviously entranced by these antics than the filmmakers might have hoped.) And per the custom of children’s entertainment, we’ve had to Kill Off the Mother, and please don’t get me started about that. I am not familiar with the Nurse Matilda books, but Nanny McPhee (Thompson) resembles Betty MacDonald’s Mrs. Piggle-Wiggle more than she does Mary Poppins: She’s darkly magical, and her discipline techniques involve extending the children’s behavior to their consequences in extremis. Faked illness gets magically enforced bedrest and vile medicine that wriggles around on the spoon like Flubber. (In one scene, a baby is mildly endangered, causing prolonged distress to a 3-year-old next to me.) After she swoops in to the rundown manor of a widowed mortician (Firth) and starts kicking magical ass with his seven hellions, Nanny McPhee’s likewise magical warts vanish, and by film’s end Thompson looks hot, younger, and thin again; if this notion offends, parents could turn it into a teachable moment with wee viewers. The kids are all fine, and I particularly liked Thomas Sangster (Love, Actually) as the oldest, but it’s the adults who are having a field day. Lansbury is a hoot as the detestable Aunt Adelaide (“What are we doing milling about this dreary vestibule?” she shrieks. “Sherry at once!”), and there are no words to describe the estimable Imelda Staunton as the family’s excitable cook. The film’s producers – the prolific Eric Fellner and Tim Bevan of Working Title Films – have tried family-film adaptations before (2004’s Thunderbirds and 1997’s The Borrowers), but this is probably their most watchable all-ages effort to date. Parents might appreciate a lighter hand with the barnyard whimsy and food fights, but overall the movie doesn’t condescend about heavy matters (grief, healing, and blended families) and is pleasantly diverting. 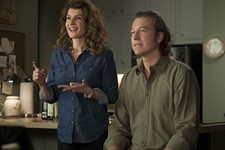 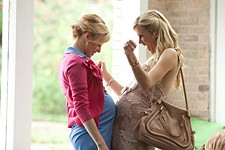