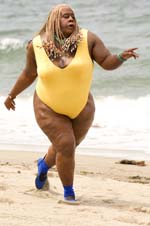 It's a shame to once again witness Martin Lawrence squander his considerable comic talents under a fat suit and fake breasts in this shoddy sequel. Big Momma's not a bad character, but this movie is without merit. Don Rhymer's script is ridiculous and beyond reason, stretching plausibility further than the Spandex covering Big Momma's ample cellulite. Any background about Lawrence playing an FBI man on a case is tangential to getting him into that dress and going undercover. There's some plot about stopping a virulent computer worm, but it's uncovered as simply as sitting in front of the bad guy's computer and pressing the Copy command. In the meantime, Big Momma struts her stuff as the housekeeper in the Fuller household, giving Lawrence the opportunity for lots of physical humor while minding the kids, doing the chores, and twirling her bountiful butt on a swivel stool. In a more sentimental streak, Big Momma helps each family member with a personal problem (although the mute infant who inexplicably and unbelievably jumps belly-whopper-style from high places may be beyond help), while neglecting his eight-and-a-half months pregnant wife (Long) at home. In its favor, the movie has no fart or poop jokes as might be expected (unless you count Big Momma's abbreviated nickname of BM), but instead features jokes about breasts and thong underwear. There's also a traumatized chihuahua named Pancho that you'd swear was on loan from Taco Bell, whose problems are solved with fifths of tequila. The only sequence that rises above mildly amusing, however, is an inspired goof on the movie 10, which showcases the unwanted sight of Big Momma in a yellow bathing suit and cornrowed hair. Nevertheless, this film's production qualities are beyond atrocious. Aside from the story's basic incoherence, I haven't seen rear projections that have looked this phony since the early decades of Hollywood. Big Momma's House 2 ends with the words "Keep a lookout. You never know when Big Momma might be back." As if there were anything we could do to stop her. 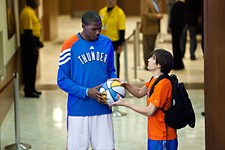