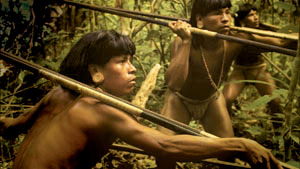 End of the Spear

Your reaction to this sincere (if not terribly sophisticated ) film about the brutal murders of five male missionaries by Waodani tribesmen in the Ecuadoran jungle in 1956 will likely depend on your feelings about the evangelical mission of some elements of organized Christianity. Some will find its simple message of turning the other cheek an inspirational one to be embraced in a world prone to violence, while others will dismiss it as a thinly veiled Sunday-school lesson in which the white man’s values are once again shown to be superior to those of the godless heathen. Objectively speaking, End of the Spear is not without its many faults, the most troublesome of which is its tendency to veer from the subtle and head full tilt toward the mawkish. (For example, the filmmakers have no qualms about cutting to a shot of ominous, dark clouds just before the unsuspecting men are massacred.) Even for the least cynical, it is easy to poke fun at the film simply based on its production values, though some of the aerial photography is spectacular. The acting is uneven, the dialogue is sometimes wooden, the score is simply atrocious (the relentless beat of the tom-toms in this day and age?), and the wigs that some of the male actors are forced to wear are just plain wrong. (One of the unfortunately bewigged bears an uncanny resemblance to Linda Hunt in a lopped-off pageboy.) Still, there’s something oddly fascinating about the true-life incident upon which the film is based, which was a blip on the public’s radar screen when Life magazine covered the story in a five-page spread soon after the murders. The naïveté with which the missionaries approach their initial meeting with the Waodani, whose propensity to violence was well-documented, appears at once incredibly stupid and divinely loving. And when their widows and children subsequently go to live with the very people who killed their husbands and fathers, it’s best not to try to comprehend such actions in any rational sense. No matter what your take is on the cultural clash of the "civilized" and the "uncivilized" in this movie, the basic elements of forgiveness and love may touch you – perhaps only ever so slightly – if you’re open to experiencing them, despite the artless way the film often tries to express those values. In that regard, End of the Spear might prick even the most hardest of hearts.