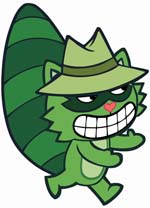 No one’s ever going to confuse Spike & Mike’s annual festival of gross-out cartoons with cutting edge animation – unless it’s the cutting edge on the broken bottle shard or the rusty switchblade that seems to cut to the heart of so many of the long-running anthology program’s more, um, razored offerings. No, S&M cuts right to the heart of the puerile, scatological 3-year-old in all of us, and then yanks that puppy right out and begins gnawing away, more often than not with a big, goofy grin that says, "Look ma, no fear!" Of course, being a scattershot affair in its best years, it often seems to also be crowing, "No brains!" or "No moral compass!" But, heck, that’s cool – precious few of us ever let Wile E. Coyote’s clear and present lack of ethical jurisdiction impair our enjoyment of his Acme-assisted death rattles then or now. It’s fun to watch ‘toons suffer all manner of grisly fates simply because in the real world it’s impossible and, more often than not, just not that entertaining once you wear out that initial copy of Death Scenes. So know this going in: Sex and violence are the currency of S&M’s gory, twisted economy. How much you want to invest in the proceedings is entirely up to you. Caveats aside, this year’s crop of bad juju runs the gamut from festival standby "No Neck Joe," an early series of short comic bits from Dallas Craig McCracken (who would later go on to create the vastly superior Powerpuff Girls) to Thomas Schoeber’s inspired "Pinata," a three-minute-and-forty-second slice of computer-generated absurdity that posits an anthropomorphic piñata struggling to avoid the slings and arrows (and truncheons, apparently) of its cruel existence. It’s a single joke gag, but the payoff is one of this year’s more adroit yuks and handled with something approaching genuine wit. That’s not always so for the rest of the collection, which, as in years past tends to rely too much on the animated equivalent of daily-strip-from-hell The Family Circus: little set-up followed by even less payoff. After a while, you get the nagging feeling that many of the short films here, while they may be inarguably sick and twisted, are serving as little more than brief calling cards for their makers. How else to explain the deadly dull, one-note chuckle of Patrick Walker’s "Odius Lepus" or Andrea Shear’s Tim Burton-esque retelling of Jack and Jill? Neither film expends more than the bare minimum needed to reach its quick, unremarkable conclusion and, as with several other of this year’s shorts, they barely qualify as either sick or twisted in a global animation milieu that’s marked these days by the truly warped worlds of hentai animé on the one side and Cartoon Network’s genuinely subversive Adult Swim on the other. Only one film, the nine-minute-long, live-action-meets-animation howler "Save Virgil," lodges in the mind long enough to be considered a genuine success, and – oh, the ignominy – that one stars former Love Liner Adam Carolla. Save us, Ralph Bakshi.