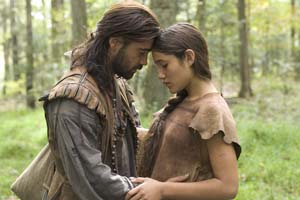 As the camera moves through the tall grass of this new world, there comes the realization that we could be within any one of Terrence Malick’s movies, any one of the previous three stunners he has made in his 35-year-long career. That beautiful, rustling, enveloping vegetation that covers the Earth like a gorgeous shock of hair has practically become Malick’s signature – it’s there to shelter the lovers on the lam in Badlands, glisten the light that falls on the vast wheat fields in Days of Heaven, and provide cover for the soldiers crawling up the contested hill in The Thin Red Line. It’s a lovely thing, and cinematographer Emmanuel Lubezki captures the beauty while also literalizing Malick’s transcendental mindset. Malick wishes to show the elements involved in the birth of America through the imagined interactions between the first Jamestown colonists who arrived in Virginia in the early 17th century and the “naturals,” as the settlers in this film call the natives. A great many sequences of visual and emotional grandeur define the early part of The New World as the two populations literally sniff one another with curiosity. The film’s opening sequence represents Malick at his most poetic and transcentally intuitive: As Wagner’s “Das Rheingold” rumbles gently on the soundtrack, members of the Powhatan tribe scamper across the palisades looking out toward the water that’s bringing strange Western ships to their shore. Again, as time passes and the demoralized colony is dying of starvation and cold, their muddy fort comes to look like one of the most appalling blights ever carved from virgin land. In these days of the movie industry’s techno overdrive, it’s good to have a Whitman-esque filmmaker whom we can rely on to venerate the blades of grass. However, instead of building on these sentiments in order to weave a tale about the collision between the “civilizing” and “natural” forces, Malick’s script (which was originally written 25 years ago) goes all goofy and turns into an insipid love story between Capt. John Smith (Farrell) and the Indian princess Pocahontas (Kilcher). I know, I know; the two are emblematic of the conflict mentioned above, but still there’s no reason for the movie to go as moony as it does – especially since this romance is speculative rather than historically accurate and the girl is but a child (Pocahontas was said to be about 12). As in Malick’s other films, voiceover is used heavily to supply the human feelings and emotions that his nature tableaus cannot express. Smith wonders aloud about the naturals’ naivete and innocence and his role as a spoiler; Pocahontas (who is only referred to in the film by her later given Christian name, Rebecca) is as sappy as any other PG-13 teenager in the throes of first love. Although the feelings are implied, nothing carnal is actually seen. At the beginning of their relationship, when their task is to learn each other’s culture, they sit on the river banks and in the tall fields playfully enjoying their discoveries almost as if they were the young innocents of The Blue Lagoon. Later, when Smith goes back to England, Pocahontas (who has now changed from her stylin’ Tiger Lily skins to “proper” Western garb) mopes by the water’s edge like a certain French Lieutenant’s woman. The chapters toward the end observe the object she becomes when she’s brought to England with her husband and child as a novelty for the royals. Her sad young death is foretold as she frolics with her son in an English garden, recalling the way Don Corleone died playing in the garden with his grandson. The scenes in England again bring out the film’s poetic sensibilities, but there is just too little character and story to sustain the long middle section. (I have seen Malick’s original two-and-a-half hour cut as well as this new one, which is shorter by 15 minutes, and the middle section is now only slightly less slow and ponderous.) With only the largely unspoken love story to steer this middle section, The New World washes ashore like the same old jive.