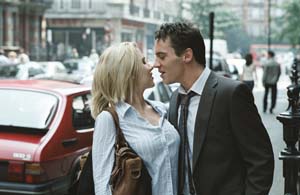 With Match Point, Woody Allen has made a perfectly nice little film – one that, despite lacking originality, is fresh in the sense that it was filmed in England, far from his beloved Manhattan, and does not feature the multihyphenate in an acting role (sparing us the increasing discomfort of his recent onscreen May-December romantic pairings). However, to hail Match Point as Woody Allen’s best work in years, as fans and reviewers are lining up to do, is to only become aware of how feeble that work has been. Pleasantly prosaic, Match Point is a diverting story of crime, love, and luck that conducts itself with a refreshing absence of moral judgment and omniscience. The movie is an ode to luck and to the acceptance of our role as the hapless pawns of a random universe. The storyline bears obvious reminders of Allen’s magnificent Crimes and Misdemeanors (a copy of the novel Crime and Punishment even comes into view). Yet the more obvious model for Match Point is Theodore Dreiser’s classic novel An American Tragedy, which was made into A Place in the Sun with stars Montgomery Clift, Elizabeth Taylor, and Shelley Winters. The similarities between the two films are so great that Match Point ought to be regarded as a modern update. Rhys-Meyers stars as Chris Wilton, a social climber who takes a job as a tennis pro at an exclusive club at the start of the film. Soon he has befriended Tom Hewett (Goode), a young man with aristocratic breeding and a monied background, and has married his sister Chloe (Mortimer). But then there’s the matter of Tom’s earthy American girlfriend (Johansson), who beckons to Chris like forbidden fruit. Transgressions follow, and then cover-ups. But justice and punishment? That’s something the story leaves to chance and the inner turmoils of the tortured mind. Though the cast is able, Rhys-Meyers is no Clift and Mortimer no Taylor. Cast in the Winters role, Johansson has the most acting to do of her entire career. Rather than providing a foil for Bill Murray in Lost in Translation or embodying the mostly silent model for the painter Vermeer in The Girl With a Pearl Earring, Johansson actually has to emote prodigiously here, and she is just not up to the task. Match Point has few distinctive markings of being a Woody Allen film, which means that it could have been made (or remade) by anyone. In that case, I doubt it would be receiving the kind of praise heaped on this Allen comeback.