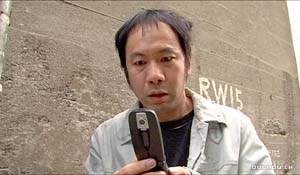 Shot in just over a week with a minuscule budget, this artsy thriller feels like a one-off from Shimizu’s Ju-on films but is probably worth a look for fans. It’s long on style and concept but lacks the primal urgency of Shimizu’s 2003 J-horror blockbuster, which successfully married its philosophical subtext – about grief, about rage, and about the permeable boundaries between the mundane and the supernatural worlds – with an old-school fright-flick ethic. Here, Shimuzu follows a Tokyo cameraman (Tsukamoto) into the city’s maze of subway tunnels, where he seeks the key to a suicide he witnessed on a platform while commuting home from work. The key is terror itself, and though the cameraman finds a shadowy underworld behind a hidden door (or does he?), Marebito is more perplexing than it is petrifying. Half of what we see is filtered through the cameraman’s lens, a technique successfully used to distort reality and amplify the suspense in Ju-on; here, the approach seems more ponderous, and while Shimizu makes his point about the subjectivity of perception (is the cameraman a reliable witness who uses technology to confirm the presence of the ineffable, or is he really mad, causing the chaos he hopes to capture on video?), the film doesn’t immerse the viewer as effectively in the horrors the protagonist perceives. There are dreadful and shocking images unleashed by the narrative, and the story (from Chiaki Konaka’s novel) has some ugly surprises. But the movie is probably too detached and too arch to really scare your pants off – it’s more like an exercise in creeping viewers out. That’s fine, of course, and it’s possible to praise the film’s climate of existential dread and urban alienation (and of psychopathic hunger sated by the blood of Tokyo schoolgirls) while noting its faults. However, Shimizu doesn’t quite achieve the ostensible goal of Marebito’s verite style and purposefully low-tech execution: to pervert our sense of what is real. It’s a movie about a movie about fear, and when H.P. Lovecraft’s “Mountains of Madness” appear in one shot, we see a bad matte painting where there should be a hallucination. 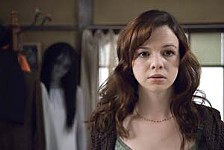