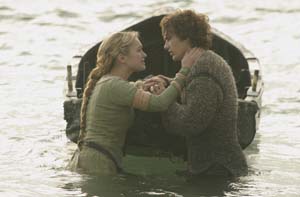 “Before Romeo & Juliet, there was …” Irritating sentence fragment aside, Tristan & Isolde’s marketing department got it right. The plot elements have mutated over time, as the myth morphed from 12th-century French poetry to Arthurian offshoot and later, fodder for Wagner, but the story of the star-cross’d Irish princess and the Cornwellian knight who got bitten bad by the love bug (or, depending on the source myth, slurped it from Love Potion No. 9) has always been top of the charts in terms of tragic pairings. Baz Luhrman knew what he was doing when he played out Romeo and Juliet’s climactic death pact to the strains of Wagner’s “Liebestod” (some of the most achingly gorgeous music ever put to page). Would that Tristan & Isolde’s director, Kevin Reynolds, were similarly inspired toward homage to lift, say, a sassy transvestite or acid tab from Luhrman’s joyfully untraditional adaptation. Alas and alack: no hint of humor or crossdressing in this dopey, mopey, all-around bore. The opening minutes drag out the backstory: Ireland at war with its charges (a motley assortment that straggles toward unification); an orphaned youth, Tristan, taken in by his kindly uncle, Lord Marke (Sewell, uncharacteristically cuckolded); and a sad-eyed Irish lass named Isolde, bitter at a father, the brutish Irish king, who treats her like chattel. Fast-forward nine years: Tristan (Franco) washes up on Irish soil half-dead and is quickly revived by Isolde (Myles). She conceals her identity, they make hot love in the sand, he goes back to where he came from, then returns to unwittingly win her hand in marriage for his uncle, the soon-to-be King of England. Screenwriter Dean Georgaris gets a hell of a pass here – the story is canon, and, in terms of emotional wallop, does all the heavy lifting for him – but he still manages to gunk up the works with dialogue that is dull-witted at best and outright howling at its worst (the clunkers “Take me to the river!” and “Why does loving you feel so wrong?” had me humming Al Green and Luther Ingram in seesawing measures). The film picks up in its last quarter, when Georgaris wisely puts aside so many murderous looks and piffling love declarations for some old-fashioned killing and pillaging, but then botches it again by forcing the viewer to ask: When a war is going down, why are the king and his fiercest lieutenants taking a time-out to attend to the lovesick? It isn’t all Georgaris’ fault: Reynolds, most damningly remembered as the captain of Waterworld, recalls none of the spryness of his 1991 blockbuster, Robin Hood: Prince of Thieves (which hasn’t exactly aged well, but could be confused for quality vintage compared to T&I’s canned grape); cinematographer Artur Reinhart dinges everything his camera glances upon (the battle scenes are a mess of swinging axe and mud, the Irish coast a total washout); and the titular lovers come off like horndog adolescents … which would explain their fondness for cooing poetry to each other in the buff. Myles, a suitably medieval-looking British actress, is all right, although her performance owes a major debt to her marvelous hair weave. But Franco – best known from the Spider-Man franchise, more beloved as Freaks and Geeks’ Daniel Desario – is a disaster: too pretty to pass for an adrenalized warrior, too tearful to make for a convincing lover. But then, had you headlined this dog – the shooting of which, incidentally, wrapped more than two years ago, making for an especially long haul to the multiplex – you might look a little weepy, too. 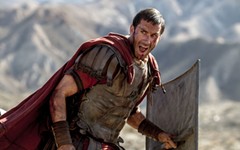 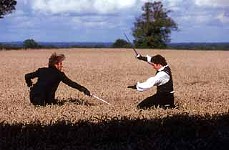 The Count of Monte Cristo
It's surely only a random twist of fate, but for a while during the first half of this, the umpteenth recent retooling of an Alexandre ...