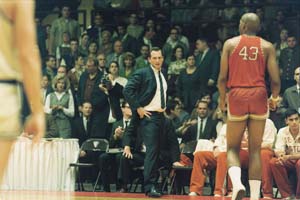 Granted, college basketball’s regular season is in full swing now, but Glory Road might have been better served by a March release date, when hoops fans are especially hungry for Cinderella stories and Disney-sanitized homilies. Cut from the same cloth as Remember the Titans and boasting the same producer (Jerry Bruckheimer), distributor (Touchstone), and a co-writer (Gregory Allen Howard), the frequently rousing Glory Road presents a fictionalized account of what many count as the most significant NCAA basketball game ever played, between Don Haskins’ underdog Texas Western (now UTEP) and Adolph Rupp’s perennial powerhouse Kentucky in the 1966 championship title game. The significance – beyond being a corker of a game – came down to Haskins’ then-revolutionary call to start five black players on the paint. After a zippy opening montage of historical footage that sets up the racial tensions of the time (and kicks off the film’s terrific, era-specific soundtrack), Glory Road hits the road as new coach Haskins (Lucas) scours the country for recruits. White players won’t come to the unranked, cash-poor Texas Western, and so Haskins turns to black players, most of whom are relegated to schoolyard courts or benchwarming in favor of white ballers. Glory Road releases the “thumping motivational speech” floodgates early, when Haskins convinces superstar guard Bobby Joe Hill (Luke) to join up, and it’s but the first of many speeches to come. You can’t argue with the message of the movie, but you can take issue with its formulaic approach. The players, portrayed by a host of charismatic, mostly unknown actors, are largely reduced to quirks (the ladies’ man, the Black Power guy, etc.); a one-note Lucas, who reportedly gained 35 pounds for the part, stalks through every scene, belly-first and bellowing all the way; and the script hangs on such ready-made metaphors as the newly diagnosed teammate whose heart is literally too large. (Insert Lucas growling, but growling motivationally: “We’re gonna need you. We’re gonna need your courage.”) And for those of us who thrill every year come March Madness, the Big Dance here will be an awful disappointment: Texas Western’s tournament trajectory is reduced to two games – its nail-biting double overtime against Kansas and the final Kentucky match (in which Texas Western squared off against future NBA coach Pat Riley, among others). Glory Road really isn’t a bad show – it’s just an obvious one – and one wishes material of this historical import had received a more refined rendering.