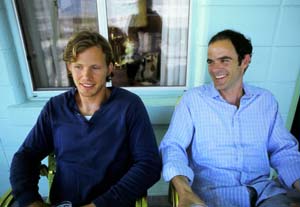 There’s so much ache in this plaintive little film that it almost makes you believe that the entire world is composed of estranged parents and children searching in vain for one another. The characters in Loggerheads are all dealing with the residue of decisions made years earlier, decisions and actions that ultimately did not produce the desired consequences. Although each character’s life is infused with an overarching sadness, few of them will cop to its presence. It’s like the comment made to Elizabeth (Harper) by a neighbor who places an anatomically correct figure of David in her front garden: “That’s your answer for everything. Move it to the back yard.” The film takes place in three North Carolina towns – Asheville, Eden, and Kure Beach – and it’s almost worth seeing for pure travelogue reasons alone. In Asheville, Grace (Hunt) returns to her mother’s home to begin a search for the child she gave up for adoption more than 20 years ago at the age of 17. She feels as though she never made the decision herself, even though she agrees with her mother (Learned) that at the time it was the best thing for everyone involved. But now she is stymied by the state’s “closed adoption” laws, which permanently seal the adoption records. Eden is home to the longtime married couple, Elizabeth (Harper) and Robert (Sarandon) – the kind of intolerant people who worry that their new neighbors might be Mexican and then experience an even worse fate when they discover that the neighbors are not Mexican but homosexual. Robert is also a reverend, and it gradually becomes clear this emissary of God has kicked his own son from their home when he discovered the teen was gay. In Kure Beach, motel owner George (Kelly) befriends a young man (Pardue) who has taken to sleeping on the beach to guard the loggerhead turtles that come there to nest. The parallels between humans and the turtles who instinctively return to nest in the exact spot where they were born is a theme writer-director Kirkman (Dear Jesse) overindulges. The convergence of the three storylines occurs at a leisurely pace, and the performances are all so heartbreaking that the movie is affecting to watch. However, the movie is ultimately sketchy in regard to details as sequences continually end with blackouts rather than continuity, while also overemphasizing thematic motifs and its “based on a true story” realism. But if you can shake out some of the chafing bits of sand that weigh down Loggerheads, you’ll find a heartfelt story about people coming to terms with irrevocable loss. 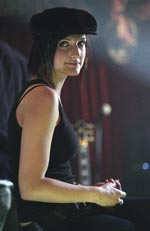 Undiscovered
A musician and an actress circle and sniff, and generally run through every cliché in the why-can’t-we-be-together playbook. 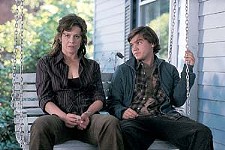 Imaginary Heroes
Only this troubled suburbanite family knows if they are imaginary heroes or ordinary people.