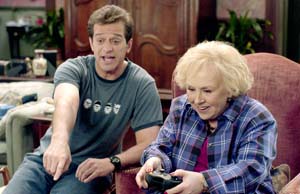 It’s gross, it’s cheesy, and it’s baked beyond all reasonable limits, but this everything-and-the-kitchen-sink comic soufflé still manages to be goofily entertaining beyond all expectations. This THC-and-Xbox-inflected tale of a 36-year-old video-game tester (Covert) who moves in with his grandmother (Roberts, of Everybody Loves Raymond) and her two elderly roommates (The Partridge Family’s Jones and Desperate Housewives’ Knight) after being evicted from his apartment borders on being so bad that it’s good, but somehow holds the course through sheer wingnut wackiness. Produced under the banner of Adam Sandler’s Happy Madison Productions, this mines much the same territory as early Sandler hits like Billy Madison, so much so that you end up wishing the former Waterboy/Wedding Singer/Enlarged Paterfamilias had the starring role. Leading yukster Covert is no Sandler – he’s barely a Rob Schneider, come to think of it – but then these days neither is Sandler. The comedy in Grandma’s Boy (and there are far more belly laughs than you might anticipate) pokes occasionally smart, knowing fun at gamers, stoners, and the developmentally arrested horndog (and horndogette) in all of us, and comes almost entirely from the genius comic timing and inspired silliness of co-writer and co-star Swardson. His gleefully satirical portrait of a sub-Peter Pan-Syndromed video-game brinksman is one of the most surrealistically funny characters since Clint Howard ran the restroom in Rock ’n’ Roll High School. Frankly, I can think of no higher praise. The rest of the film, involving a barrage of hit-or-miss gags running the gamut from “old gals mistaking pot for tea and getting stoned” (hit) to “oddball African Bushman showing up with lion” (miss) and self-obsessed Matrix wannabe doing the robot (hit, then many, many misses), is trashy, niche-marketed fun. Stupid, yes, but fun nonetheless. 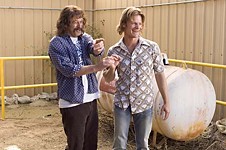 Strange Wilderness
When a popular wildlife TV show starts slipping in the ratings, the clueless hosts go off to the Andes in search of Bigfoot and big ratings. Big mistake. 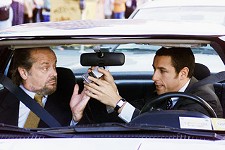 Anger Management
It’s probably a good thing that Jack Nicholson didn’t get the Oscar last month for his performance in About Schmidt, because right about now he’d ...