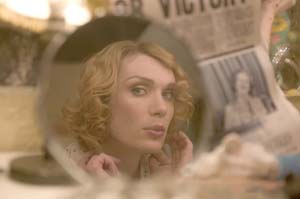 It’s 14 years on since the events depicted in Neil Jordan’s hit film The Crying Game took place, and times have changed. Something akin to Northern Ireland’s IRA-inflected "Troubles," for one, seems to have spread and spiraled westward, Boy George is facing 40 years for (more) narcotics possession, and the girl who is actually a boy in Jordan’s new film is relatively unsympathetic to the political timbre of the day and gets to hobnob with Roxy Music’s Bryan Ferry instead of Forest Whitaker. But then, as the saying so accurately puts it, the more things change, the more they stay the same. Breakfast on Pluto could well be The Crying Game’s feel-good stepsister, a slice of Ye Olde Eire Sod’s history – the Seventies, mainly – as viewed through the Alice in Wonderland funhouse-mirrored life of swinging transvestite Patrick "Kitten" Braden, who wanders through and into the pop-and-politics culture of the day accompanied by a breezy rock & roll soundtrack as earnest and breathy as her own coquettish narration. Adapted from Patrick McCabe’s novel by Jordan and the author, Pluto’s not inconsiderable charms rest entirely on the slender shoulders of its young star, whose aquiline profile and piercing eyes have lately been put to more traditional use rattling moviegoers in the thrillers Batman Begins (where he played the madhouse freak show called the Scarecrow) and Wes Craven’s Red Eye (as an ice-and-tonic-blooded psychopath with an agenda). Here, however, Murphy goes to great lengths to appear as just one of the boys (by appearing, oddly, as just one of the girls), and he succeeds quite well. Abandoned by his "Phantom Lady" mother at birth, Kitten grows up and longs to seek out this mystery woman, if only to assuage his unshakable belief that she was the not-so-prim doppelgänger of Mitzi Gaynor. His presumed birth father, a local (and randy) priest played by Neeson, is no help here, and once of legal age Patrick heads out to explore the wider world, where he falls in with and then in love with a scattering of IRA sympathizers, including Friday’s mullet-bedecked glam rocker Billy Hatchet (who tours the UK with his bizarrely Native-American-influenced band the Mohawks). Rea shows up as well, as a two-bit magician who hires Kitten as his shill and assistant, and just to make things very strange indeed, Ferry has a genuinely disturbing cameo as a vicious-minded john. As with most Jordan films, there’s more than this going on at any given moment, and Kitten is unmistakably a unique kind of Everyman/woman lens through which to view history’s unfolding panoply. That she doesn’t end up commenting all that much on events is a little irritating; after her implication in the IRA’s bombing of a local disco, you’d like her to offer an opinion one way or the other on the use of terror to achieve political and social goals, but all we get are broad swathes of her fey, double-entendre-loaded personal musings and a serious beating from the coppers. Nevertheless, Breakfast on Pluto is a charming, winsome slice of Seventies pop kitsch reconceived as a kind of knight-errant quest for that holiest of all grails, dear old mom.