The ghost has literally gotten into the machine in this Japanese horror film that works primarily with dread and inexplicable phenomena rather than blood and guts. Made in 2001 and purchased by Miramax for the rights to an American remake (which is in the works and being directed by Wes Craven), Pulse was reacquired for theatrical release by Magnolia Pictures. A lot has happened during the four years in which Pulse was shelved: What’s now known as J-horror (Japanese horror films) has revitalized the genre and led to a flurry of American remakes and takeoffs (The Ring movies, The Grudge, and Dark Water come instantly to mind). These films – with their cautionary tales about the encroachment of technology and the passivity of their protagonists – contrast sharply with the more visceral American gorefests that have become de rigueur. Arriving in American theatres after the last few years’ onslaught of the J-horror-inspired American films, Pulse is liable to look dated and clichéd. But for anyone interested in this genre of films, Pulse is the ur-work, the original that makes most of the other films look like wan imitators. Nevertheless, it’s difficult to say precisely what is going on in Pulse. The story is set in modern Tokyo, although it bears little social resemblance to that crowded city. Individuals are strangely isolated from one another, despite coming into contact. Two storylines emerge. The first follows several friends who work together at Sunny Plant Sales, and become concerned about one of their co-workers who has an important computer disk and doesn’t answer his phone. When one of the women goes over to check on him, he enters another room in his apartment and hangs himself. The body then evaporates into the wall, leaving behind a large, nasty smudge. The other storyline involved a computer Luddite who hooks his computer up to the Internet for the first time and instantly receives the message "Would you like to meet a ghost?" More weird images start appearing through his computer. A few theories are idly suggested along the way: Maybe the universe has a finite amount of space for dead people, and the souls have to ooze into the realm of the living for space. One woman frets that death will be as lonely to endure as life. The film’s ideas are provocative, yet vague and unfully formed. It’s much like Pulse itself, which is a bit too long, despite several great sequences. Kiyoshi Kurosawa (no relation to the great Akira) films most of the movie in mid- to long-shot, emphasizing the anomie yet allowing little real character to emerge. His ghosts are magnificent though, and their plaintive cries of "Help" are truly haunting. 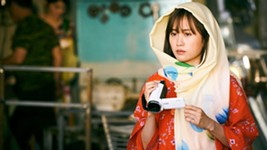 To the Ends of the Earth
Japanese travel story captures the isolation of culture shock, with fear and levity 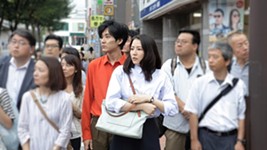