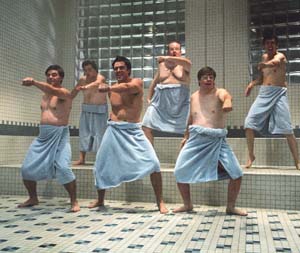 There's irony in here somewhere but it's embedded so deep in the bones of this thing that it's hard to ferret out. Or maybe not. It seems to me that a comedy that purports to have a message about treating the intellectually challenged as regular human beings and stars Johnny "Jackass" Knoxville is about as disingenuous as a comedy that urges us to see past a person’s body size to appreciate the beauty within and stars Gwyneth Paltrow in a fat suit. Oh wait. That’s Shallow Hal, you say, and the Farrelly brothers already produced that movie a few years ago (with brother Bobby also directing)? And now they’re back producing The Ringer, which happened to be filmed in the Austin/San Marcos area? I’ll leave you on your own to gnaw on the conundrums, but in case you don’t want to decide this ethical dilemma on your own, the Special Olympics powers-that-be have gone out of their way to offer The Ringer its official seal of approval. Therefore, this film must be good for you – or at least inoffensive to the spokespeople for the group most likely to take offense at the movie’s Special Olympics plot device. However, you have to wonder whether such a blessing has the capacity to turn a comedy’s humor from barbed to toothless. As it is, The Ringer’s humor is never consistently anything. It takes a gauche premise – an average Joe enters the Special Olympics as a ringer, confident he will win big money that will pay off his uncle’s gambling debts and obtain the operation needed by his gardener (whose accident is his fault) – and adds on some comeuppance, romantic intrigue, and inspirational lessons. The result is an uneven comedy, whose occasionally hilarious lines of dialogue don’t fully compensate for its long interludes of predictability. To its credit, the filmmakers use lots of Special Olympians and intellectually challenged actors, and keeps them front and center throughout the film. Then there’s Knoxville, whose whole pre-movie-star identity was based on proving he would do the dumbest things imaginable. In The Ringer he plays dumb like a fox as he masquerades as Jeffy to rig the track competition and win the heart of Special Olympics volunteer Lynn (Heigl, currently seen on TV’s Grey’s Anatomy). His fellow Olympians soon smoke out his ruse but follow that old adage about the enemy of your enemy being your friend, and so help train Jeffy to beat the arrogant returning champion Jimmy (Flowers). Knoxville is actually turning into a reasonable actor with a strong stage presence, Heigl works her preternatural division between angel and landlubber that she uses to such good affect on Grey’s Anatomy as the surgeon/former Playmate, and Cox is just baffling as the loutish uncle who looks at all times as if he’s doing a Joe Pesci impersonation. Screenwriter Ricky Blitt (TV’s The Family Guy) has some inspired moments, although one wonders about the wisdom of the charges of idea theft he has launched at the head South Park hooligans, Matt Stone and Trey Parker, who last season featured a show with a similar premise. Whether Ringer, with its mild comedy and milder messages about inclusiveness and tolerance, will be embraced by Knoxville’s hardcore Jackass fans remains to be seen. But we can at least trust that the Farrellys will stay the course. 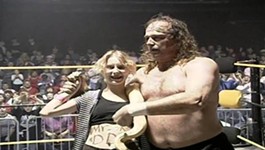 Beyond the Mat
Even if you aren't a World Wrestling Federation zealot who stood in line for two hours to get your first-edition copy of The Rock Says ...