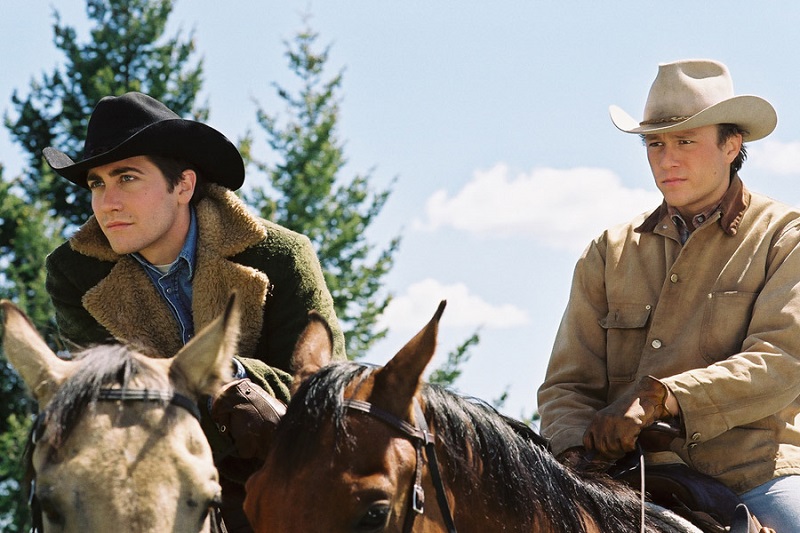 Enough with the "gay cowboy" label. The term is more or less accurate, I suppose, but the phrase has a way of diminishing this amazing movie’s focus and reach. Brokeback Mountain is a love story that’s defined by its staggering heartbreak. The film is no more – or less – a gay cowboy movie than Casablanca is a hetero émigré romance or King Kong is a love story between human and simian. The phrase "gay cowboy movie" carries with it unspoken expectations of something like Andy Warhol’s 1969 Lonesome Cowboys, a flaming relic from a world in which men were women and queens were king. Brokeback Mountain, a story that transpires over 20 years, actually begins in 1963 in the decade that’s come to be known as the Warhol Sixties, but it takes place in a world that’s far from New York and its tradition of transgressive artistry. Brokeback Mountain is a place that exists in the wilds of Wyoming – a place mostly populated by bears and sheep and, one summer, two itinerant ranch-hands, Jack Twist (Gyllenhaal) and Ennis Del Mar (Ledger), who’ve been sent up to Brokeback by Joe Aguirre (Quaid) to tend his sheep during the summer grazing. Though Jack and Ennis are both dirt-poor cowboys, they couldn’t be more dissimilar in temperament – Jack an outgoing rodeo showman with little to show but his bumps and scrapes, and Ennis a taciturn cowpoke trying to earn money to get married in the fall. But time, isolation, alcohol, and frost break down their resistance, and one night they wordlessly start their pup tent a’rockin’. Despite each man’s protestations that he is "not queer," their summer idyll continues until it’s time to come down from the mountain. Four years pass before the two hook up again, and in the meantime each has settled into marriage and fatherhood, Jack in Texas and Ennis in Wyoming. From there their relationship takes on a sort of Same Time, Next Year rhythm, as the men get together only a few times a year, slipping away for fishing and hunting trips. Yet the movie Brokeback Mountain holds an even greater resemblance to is Desert Hearts, the lesbian romance set in 1950s Nevada in which "the love that dares not speak its name" flourishes amid the Western landscape and the isolation. Still, the lovemaking in Brokeback is modestly filmed by modern standards, a choice made by director Ang Lee who, apart from his last film, The Hulk, has never misjudged public taste. The heartbreak of Brokeback Mountain doesn’t truly set in until the years start whizzing by. Although Jack can picture scenarios in which the men might live out their lives together, Ennis wages an ongoing battle to repress his sexual longing for Jack. Scarred by the memory of a brutal gay-bashing witnessed in his youth (this is, after all, the land where Matthew Shephard was killed and mutilated even decades later), Ennis fears that if "this thing" were to grab hold of them in the wrong time and place, he and Jack would surely die. "If you can’t fix it, you’ve got to stand it," is his motto. The passage of 20 years in this frustrating state of limbo is what makes Brokeback the romantic tragedy it is: The love itself isn’t sad, only its seeming impossibility. So many aspects of this moviemaking come together so brilliantly, however, that they have helped Brokeback attain the vast critical praise it deserves. It’s a beautifully written piece by Larry McMurtry and Diana Ossana, who optioned and stayed true to the work of Annie Proulx, who wrote the original short story. The cinematography sweeps the viewer into the majesty of the Marlboro Country landscapes and the sound and huddle of sheepherding together. Ledger and Gyllenhaal are both magnificent, even though Ledger’s role is the more actorly one that has been receiving most of the plaudits. The women’s roles are revelatory: Williams as Ennis’ silently knowing and suffering spouse and The Princess Diaries’ Hathaway as Jake’s tough-as-nails Texas rodeo princess. The sadness that infuses Brokeback also derives from the deadening affect the men’s self-repression has on their families and other loved ones. It’s possible to point to some weak spots in Brokeback – its seeming multiple endings, the lack of clarity about certain images, some digressions – but there is no movie this year that has moved my heart more.