Comedian Sarah Silverman's jokes are eminently quotable, though to repeat them in a review would be to deflate her act and the experience of watching this movie. Silverman says the most outrageous things – dirty, profane, solipsistic, and offensive – but she gets away with it again and again because her delivery is so sly. Her stage presence has the demeanor of a well-bred Jewish girl who delights you with her company until she lets loose with a vivid punchline that you can’t see coming and suddenly that presumptively nice young woman has turned into a stealthy potty-mouth. And with topics such as rape, 9/11, the Holocaust, and AIDS as part of her recurring repertoire, she had best have a deft delivery in order to escape the theatre without getting mugged. Silverman doesn’t play it safe, which makes her a good comic although not necessarily a good filmmaker. On the heels of her devastating turn in The Aristocrats (the comedians’ who’s-who movie about the life of one particular dirty joke) and her appearance in the only non-singing role in Rent, the promise of Jesus Is Magic is an unadulterated 72 minutes of Silverman by herself. Be careful what you wish for though: The movie delivers on its promise of Total Silverman, but that turns out, in this instance, to be not such a good thing after all. Jesus Is Magic is a muddle that combines onstage performance with fantasy song sequences and little reality vignettes at the opening and close of the film. She’s with two friends (Posehn and Laura Silverman) at the beginning of Jesus Is Magic, and as they talk about their recent accomplishments, we watch Sarah Silverman squirming over her sense of failure. This leads to her onstage performance in an auditorium before a live audience, which is preceded by a rant at her manager (Odenkirk) over the procurement of the wrong bottled water and is then interrupted by ill-conceived song sequences. One has her dressed in a modish Marlo Thomas look singing politically incorrect things about race, another places her in her grandmother’s retirement home strumming a guitar and singing lyrics about how the old people are all going to die soon. Director Lynch (who makes his feature debut here after working with Tenacious D and some other musical endeavors) helped compose the tunes, but they are as off-key as his direction. The performance sections of the movie maintain such a tight focus on Silverman that they could have been filmed with no audience in attendance for all we see. The transitions from performance to song and to reality are strained and awkward. Rather than creating something that might help launch Silverman into greater notoriety, Lynch has done the comic a disservice and helped mold something that’s really for the fans only. (See interview with Silverman at austinchronicle.com/issues/dispatch/2005-12-09/screens_feature3.html.) 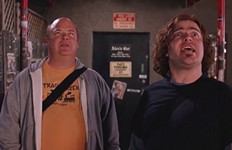 Tenacious D in The Pick of Destiny
How much you'll love (or loathe) JB and KG's passion for the power chord and all it entails will depend, most likely, on your familiarity with the duo beforehand.